Action against filling of Akkulam lakeside

Earlier Thiruvananthapuram Express had reported on the dumping of solid municipal waste on the lakesides, with some being dumped inside the water body as well.

THIRUVANANTHAPURAM: The state government has initiated action on the filling of Akkulam lakesides and its coastal wetlands following reports of massive destruction of coastal wetlands and rampant construction activities. Revenue Minister E Chandrasekharan has sought a report from Thiruvananthapuram District Collector in this regard. In another development, the Kerala Coastal Zone Management Authority has also sought a report from the local self-government department.

The action was taken following complaints by members of the NGO Environmental Protection and Research Forum (EPRC). “I had received a verbal complaint earlier following which I intimated the Collector and sought action on the issue. That was during the time of the election. I received a written complaint again, following which I asked the Collector in writing to take urgent action on the issue,” says E Chandrasekharan. 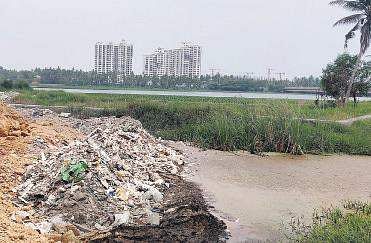 Earlier Thiruvananthapuram Express had reported on the dumping of solid municipal waste on the lakesides, with some being dumped inside the water body as well. The RDO had earlier sought action against the party responsible for the act and had served a stop memo against the encroachment and filling up of the Akkulam lakesides with waste. However, the Attipra village officer Jayan K M was unavailable for comment.

“The apathy of the officers concerned has led to further destruction of the lake and its coastal wetlands. Major construction activities are being carried out in the buffer zone. Despite the RDO issuing a stop memo against the encroachment and filling up of the lakesides with waste and earth, no action is being taken by the village officers.

They have instead used the earth to cover up the accumulated waste, thereby aiding in the further filling up of the lakesides,” says Sanjeev S J, a member of EPRC. “All the activities are being carried out in the buffer zone of the lake,” he adds. Meanwhile following a complaint, the Kerala Coastal Zone Management Authority has sought a report from the local self-government department on whether there has been any violation of the Coastal Regulation Zone (CRZ) norms. “I have sought a report from the secretary of the concerned municipality to see if any CRZ violation has occurred in the said area. If any violation is seen, action will be taken against it,” said Veena Madhavan, member secretary, KCZMA.

Stay up to date on all the latest Thiruvananthapuram news with The New Indian Express App. Download now
(Get the news that matters from New Indian Express on WhatsApp. Click this link and hit 'Click to Subscribe'. Follow the instructions after that.)
TAGS
Akkulam lakesides