Clearing the way for Killiyar

‘Karakaviyathe Killiyar’, the second phase of cleaning the river, saw the participation of 25,000 volunteers

THIRUVANANTHAPURAM: On Friday morning, close to 25,000 people took to the banks of the Killiyar from Vazhayila in Karakulam to Karinjathimoola in Anad, armed with cleaning tools. The cleaning efforts that began at 8am continued well into the evening with the volunteers of ‘Killiyar Mission’ covering the 22-kilometre stretch of the river as well as 31 canals along the water body. ‘Karakaviyathe Killiyar’ is the second phase of cleaning the river, one of the major sources of water in the district. 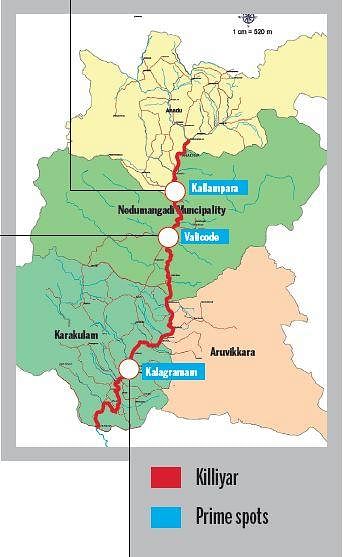 Minister Kadakampally Surendran inaugurated the cleaning work at Palam Junction in Vazhayila. “This is a model project and the government will work wholeheartedly to ensure that all the effort put in for cleaning the river is not in vain,” he said while addressing volunteers. Ministers Thomas Isaac, V S Sunil Kumar, Kadannappally Ramachandran and K Raju also took part in the cleaning efforts at various points of the 22-km stretch.

The cleaning work in each region was led by local self-government bodies including Karakulam, Panavoor, Aruvikkara and Anad panchayats and Nedumangad Municipality where the river passes through. The mission is led by Nedumangad block panchayat under which 42 local committees were formed to mobilise volunteers. Apart from NREGA workers, these volunteers also joined the efforts. Around 170 police force members also joined in the mission. Fire and rescue and ambulance services were also set up to ensure the safety of workers.

“The water was black before the first phase of cleaning. We had closed all the taps leading to the water body back then. Now, the waste is considerably less and manageable. The garbage collected today will be moved to the waste management facilities of the block panchayat. We are thankful to each and everyone who took part in the efforts,” said Biju B, Nedumangad block panchayat president.  The reclamation works along the Killiyar as part of the mission has also begun. A total of 15 acres of land have been reclaimed in Karakulam panchayat and Nedumangad municipality.

Public cooperation,  a must
“I used to take bath in the Bali kadavu as a child when the river was clean. The river began getting contaminated after rampant construction. I’m glad that efforts are on to reinstate its lost glory,” said 69-year-old Soman M, a Kallampara native who was one among the hundreds who gathered at the Kallampara Bali kadavu to take part in the mass cleaning drive. Sameena Beevi, a MGNREGA worker, said that things are slowly changing but garbage dumping continues to be a menace. “This is a huge initiative and public cooperation is a must to keep the river clean. There should be surveillance cameras along the river stretch,” she adds. Around 89 NSS volunteers from Government Girls Higher Secondary School took part in the cleaning drive. Karthika A S, a Class IX student who took part in the cleaning drive, said that it is the responsibility of the public to protect waterbodies. “Every individual irrespective of age should take up the responsibility to save the environment,” Karthika added.Inaugurating the mass cleaning drive, Minister Thomas Isaac said that the initiative has helped improve the quality of water in the river. He said that the government has set aside Rs 20.5 crore for river rejuvenation.
— Shainu Mohan

Valicode army clears plastic waste
The cleaning drive which got under way at around 9am at the Valicode bridge was aimed at making the river and its surroundings free from plastic waste. “The river should be cleaned and plastic should be removed from the area to enable the flow,” said Sufail S, a first-year student from Government College Nedumangad. According to Sufail, around 200 students from the college had participated in the mass cleaning drive.Both the youth and the elderly worked tirelessly with their spades to remove pollutants from the river. ‘This is the first time that I’m taking part in the cleaning mission. Plastic waste has been a problem in Valicode and other adjoining areas for many years,” said 72-year-old Vasumathi M, a resident of Chellamcode.According to Koppam ward councillor S Rahiyanathu Beevi, the non-residents are to blame for dumping plastic in the area. She further added that the Nedumangad municipality was taking all efforts to put an end to the same. “People who are part of the drive will create further awareness.” Volunteers were given precautionary tablets to protect them from skin diseases on Thursday.
— Ramu R

Age no matter  for a clean river
Cleaning work in the Kalagramam region, Vazhayila, began at 8am. The first step was to remove the wooden panels that doubled as a shutter in a small bund across the river. After which, volunteers began collecting waste. Age proved to be just a number for the elderly volunteers here.  Cristamma, a sexagenarian, was one among the volunteers at Kalagramam who stood out, her energy guiding her despite the slippery rocks and sun. Despite struggling with her gloves, she handled the waste efficiently. Many among the close to 60 volunteers in the area were past the age of 50. Those who couldn’t help with cleaning, prepared food and tea for the volunteers. A Ramachandran, another senior citizen who is a part of the Killiyar Mission local committe was excited as he spoke about the initiative. “There were close to 25,000 people taking part in a cause which does not directly affect them at the moment. Also a majority of the volunteers have completed their matriculation. This is the work of an educated society and an example on how to use human resources constructively,” he said.
— Gopika I S

Stay up to date on all the latest Thiruvananthapuram news with The New Indian Express App. Download now
(Get the news that matters from New Indian Express on WhatsApp. Click this link and hit 'Click to Subscribe'. Follow the instructions after that.)