THIRUVANANTHAPURAM:  Over 3,950 licences were suspended from January to November 2019 by the motor vehicles department (MVD) for traffic rule violations such as using mobile phones while driving, speeding, overloading, drunken driving and traffic signal violation in the district. Besides, cases of juvenile driving and licence-less driving were also reported.

According to official records with the transport department, close to 1,205 cases were registered for juvenile driving against the owners of the vehicles and about 4,001 cases against students for driving without a licence across the state over the past three years. Under the Safe Kerala project, the MVD has decided to focus on creating awareness in educational institutions this year. 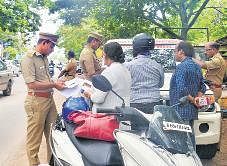 “Since the implementation of the Safe Kerala project, stringent penalties have been enforced by the department for violations under the Motor Vehicles (Amendment) Act. After strong enforcement, the traffic transgressions have come down. We are also taking action against the owners of the vehicles for allowing juvenile driving which has also seen a decline after the enforcement. So, we are planning to create more awareness in schools and colleges to prevent such violations in future,” said R Sreelekha, transport commissioner.

For underage driving by people below 21 years, the guardians or vehicle owners will be held responsible and will either be charged with a  fine of `25,000 each or three-year imprisonment depending on the offence.  The vehicle registration of the owner will also be cancelled. The offenders will be tried under the Juvenile Justice (Care and Protection of Children) Act. For licence-less driving, a fine of `10,000 will be imposed on the driver and `5,000 on the owner of the vehicle.

As part of the National Road Safety Week, on January 11, the transport department is planning to launch more campaigns about road safety and traffic rules in educational institutions. “This time, our focus is more on schools and colleges where we will organise various activities highlighting the importance of road safety. We are also planning to revive traffic clubs in schools which have become defunct,” said Sreelekha.

Under the Safe Kerala project, about 85 enforcement squads spread across the 14 districts in Kerala have been conducting regular inspections and reviewing accident-prone spots soon after they are reported. Kerala has about 14 regional transport officers, 99 Motor vehicle inspectors and about 255 assistant motor vehicle inspectors.

State of affairs
●Close to 1,205 cases were
registered for juvenile driving against the owners of vehicles and about 4,001 cases against students for driving without a licence across the state over the past three years
●As part of the National Road Safety Week, the transport department is planning to launch campaigns about road safety in educational institutions