‘Gopinath Muthukad 45 years of Magic’, a short film on the life of the famous magician, was screened at the Kalabhavan Theatre on Friday.

THIRUVANANTHAPURAM : ‘Gopinath Muthukad 45 years of Magic’, a short film on the life of the famous magician, was screened at the Kalabhavan Theatre on Friday. Filmmaker Adoor Goplakrishnan, Minister for Culture A K Balan and Muthukad’s mother Devaki Amma attended the screening to honour the magician. The short film which pays tribute to Muthukad depicts his hardships and achievements over the course of 45 years. 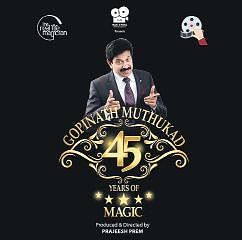 “At the age of seven, I had started learning magic. At 10, I did my first magic show which was a failure. But my father told me that one cannot learn anything from victory while you can always learn from failures,” said Muthukad on the occasion.

The film, directed and produced by Prajeesh Prem, was released under the banner of Roots and Wings productions. Muthukad himself acted in some of the flashback scenes. According to director Prajeesh, the shooting of the film began six months ago. “Ernakulam, Nilambur, Delhi and Thiruvananthapuram are some of the locations we shot at,’’ he said.

Prajesh inspired to make the short film after reading Muthukad’s autobiography titled ‘Ormakalude Manthrika Sparsham’. Magic acts such as the fire escape and the propeller escape performed by Muthukad which ended as failures are some of the high points shown in the movie.

The inauguration of Magic Academy (Poojapura), Magic Planet (2014) and Different Art Centre (2019) in the city are some of Muthukad’s achievements highlighted towards the end of the film. His selection as a celebrity advocate of Unicef is also featured. Adoor Gopalakrishnan presented a memento to director Prajeesh after the screening had ended.