Similarly, the number of cases registered for driving without fastening seatbelts has nose-dived to 538 from 7,912 during the same period.

THIRUVANANTHAPURAM: There has been a drastic decline in traffic violations such as riding without wearing helmets, driving without fastening seat belts and drunken driving in the district in recent times. According to the statistics available with the Motor Vehicles Department, although it had registered as many as 26,199 cases in December 2018, the number came down to 3,129 in December 2019.

According to a road safety official, the Motor Vehicles (Amendment) Act that came into effect from September 1, 2019, which saw an increase in the fines for traffic offences is one of the main reasons for the drop in the cases registered. The pillion rider helmet rule that came into force from December 1, 2019, also helped in making a difference.

“About 50 per cent of pillion riders in the city wear helmets now. We are hoping that the number of two-wheeler accident fatalities will come down significantly with helmet mandatory for pillion riders,” said Bijumon K, regional transport officer (Enforcement).

Other than road engineering defects, the presence of large potholes reason for the two-wheeler accidents as pointed out by the RTO.

“Around 219 two-wheeler accidents including 133 in rural areas and 86 in the city had occurred in December 2019. Wearing poor quality helmets and  failing to tighten the chin strap of the helmets were some of the other reasons identified for deaths and injuries in accidents. As the number of accidents in rural areas of the city is increasing, the MVD officials plan to increase surveillance in the area. 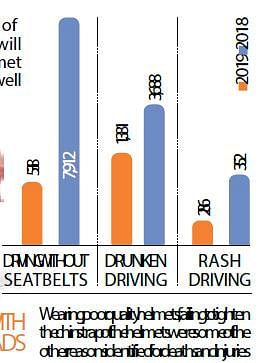