Overflowing manholes can pose health hazards to the public.

THIRUVANANTHAPURAM: Overflowing manholes can pose health hazards to the public. It’s very difficult to detect whether a manhole is clogged or when will the overflow happen. Often, people and officials wait till the very end to clean the manhole which results in overflowing. As a solution, city-based Genrobotics, which has designed and developed Robotic solutions to address social issues such as manual scavenging, have come up with new technology.

‘G-Beetle’, a manhole monitoring system (MMS), will provide an alert when a manhole is getting clogged or overflowing.Genrobotics was founded in 2017 by a group of like-minded youngsters Nikhil N P, Rashid K, Vimal Govind M K and Arun George. The firm has been in the headlines with the innovation of Bandicoot, a remote-controlled robot that goes down a manhole and scoops out the solid and liquid filth to remove blockages in urban sewers. 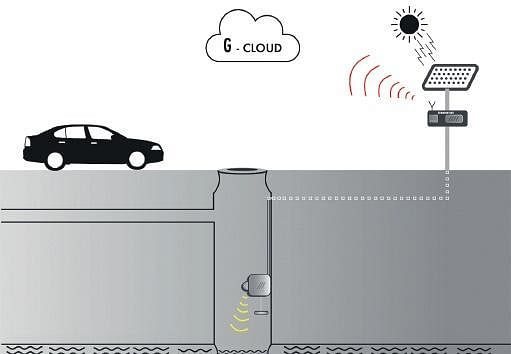 The innovation was created to end manual scavenging. It is already being used in many other cities such as Bengaluru and  Ludhiana. “The idea struck us when we learnt about the manhole deaths in Kerala and Bengaluru. Ever since its launch, Bandicoot has been a huge success and has been able to end manual scavenging to a great extent. G-Beetle has been developed with the aim of a better manhole cleaning strategy,” said Vimal Govind.

“The idea is to integrate the application with our robotics model so that the robots can be brought for cleaning once the alert message is received. Currently, we are using the application to detect the status of manholes in Technopark to clean them at the right time. The application can be used by Kerala Water Authority (KWA) to detect such clogs and rectify them,” he added.

HOW DOES IT WORK?

Sensors placed inside the manhole helps in getting the information of the manhole and monitor the periodic trends. Whether it’s flooded or not or when the manhole became clogged etc will be detected. The relevant data is then processed by an onboard chip and remotely viewed in the forms of alerts and messages using email or any other mobile applications. “Additional sensors if added can also give information about the rain, humidity, and temperature to prevent the overflowing of manholes,” Vimal said. The manhole management system, with the help of AI, will also provide updates for the routine maintenance of the manholes.

Now we are on Telegram too. Follow us for updates
TAGS
G-Beetle manhole