For a while now, East Fort has been one of the blacklisted spots on Thiruvananthapuram’s map, The infamous corridor is known for pedestrian deaths and road accidents.

THIRUVANANTHAPURAM: For a while now, the busy area in the state capital has been a dangerous corridor that spells death. During every election, it finds a place in the manifestos of political parties. But, the ruling parties have consecutively failed to bring in any real changes in the area or resolve the crisis. Though many projects are in the pipeline, there is little hope of any of them materialising soon

For a while now, East Fort has been one of the blacklisted spots on Thiruvananthapuram’s map, The infamous corridor is known for pedestrian deaths and road accidents. Though many pedestrian amenities were proposed in this busy spot that witnesses plenty of pedestrian activity during the day, none has realised. According to sources, around 40 pedestrian deaths have happened in the location in the last 10 years.

As per NATPAC (National Transportation Planning and Research Centre) statistics, a total of 137 accidents and 20 deaths were reported on the Overbridge Jn-Attakulangara Jn stretch between 2016 and 2018. The report has listed East Fort as one of the high-risk areas in the district.  The Skywalk and Subway projects are the two major initiatives being planned in the area now by the Thiruvananthapuram Corporation and the Smart City Thiruvananthapuram Ltd (SCTL). Another Skywalk project by Kerala State Transport Project (KSTP) is also in the pipeline. 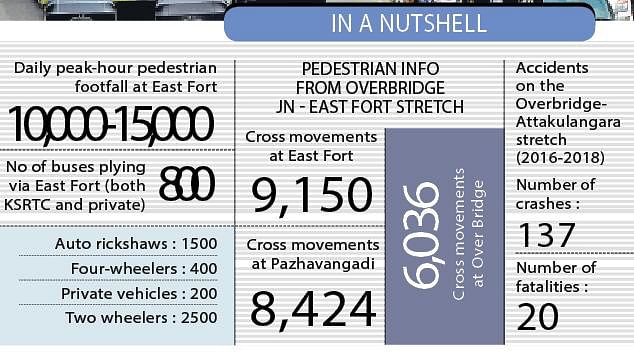 According to experts, the lack of coordination between various departments involved in the projects is the major cause of delay. Recently, KSTP also came up with a project to set up a six-metre-wide skywalk connecting the Secretariat, KSRTC bus terminal, Central railway station,  Sree Padmanabaswamy Temple, and Chalai (east Fort). KSTP has brought in an agency to prepare the DPR for this. The proposed skywalk will be capable of accommodating small electric vehicles as well.

Smart City to award work order soon
Smart City Thiruvananthapuram Ltd (SCTL) has come up with the Subway project to make East Fort safer for pedestrians.  The plan is to construct the subway 1.2 m below the existing road level to interconnect Chalai Market, East Fort bus stand, Putharikandam Maidan and Gandhi Park. Despite the delay caused by the pandemic, the SCTL has finished the bidding process. “We will issue the work order once the local body elections are over. We had to stall the procedures because of the poll code of conduct,” said an official. The plan is to complete the project in 18 months.  However, shifting of utility lines and getting all necessary clearances are going to be a herculean task for SCTL. The authorities are also planning to rehabilitate nearly 70 street vendors occupying the subway.