Preeja, a class IV student’s education was also halted as she didn’t have a smartphone at home.

THIRUVANANTHAPURAM: When virtual classes started in June last year, Sreekumar, a class I student from Puruvimala tribal settlement, didn’t have any resources to access them. He was among the tribal students across the state who were unable to attend the virtual classrooms. Now, the Karnataka-based NGO, Sri Sathya Sai Annapoorna Trust, is helping students like Sreekumar.

Preeja, a class IV student’s education was also halted as she didn’t have a smartphone at home. However now, she can attend the classes with the smartphone given by Childline Thiruvananthapuram under their Snehanidhi project. 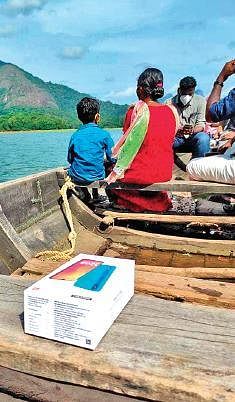 Most of the students in the tribal settlements across the state are struggling due to lack of resources. However, all the 16 students at the Government Tribal LP School in Puruvimala are able to continue their online education with the help of a few good samaritans who provided smartphones and televisions to them.

Children from the tribal settlements such as Thenmala, Thodumala and Puruvimala study at this LP school. After class IV, they have to travel to the city to continue their education. “Only a few children from the tribal settlements join the school and most of them stop education after class IV because of the travel involved. So, it is important that more attention be given to these children,” said Akhilesh S S, one of the teachers at the school.

Last year, gadgets were distributed to about seven students by various charity organisations, Akhilesh said. “This year, the remaining students were also provided with smartphones. With the help of the alumni of 2007-2008 BEd batch of Mar Theophilus Training College, the last child was given a smartphone two weeks ago,” he added.

Now we are on Telegram too. Follow us for updates
TAGS
online classes tribal kids