Narcotics is a dirty business,” a dialogue by actor Mohanlal from the superhit movie Lucifer, might have received huge applause from the audience.

THIRUVANANTHAPURAM: Narcotics is a dirty business,” a dialogue by actor Mohanlal from the superhit movie Lucifer, might have received huge applause from the audience. However, many criminals have taken to this business which has been “flourishing” since the lockdown.

Professional criminal gangs took over the large-scale supply in the city as the lockdown hampered their other “prospects”. Ever since the curbs imposed in the state last year, there has been an inflow of large quantities of ganja into the district. As per the records of excise and police in the last one year, many seizures involved more than 100kg and that too were smuggled into the district on trucks.

According to the enforcement agencies, it is evident to see a change in the scale of ganja supply in the last one year due to the rise in demand and notorious goons taking over the narcotics business.
Unlike other cities in the state, only a few narcotic-related crimes had been reported in Thiruvananthapuram before the lockdown.

However, the figures of seizures by the excise department show a disturbing trend. The police have made fewer narcotic drugs and psychotropic substances (NDPS) than the excise due to the nature of their multiple duties. As per the excise data, there has been an approximately 44% increase in the quantity of ganja seized in the district this year. These were transported through various means for supply.

Recent haul
The city police seized 100kg of ganja last month from Chackai and arrested a Tamil Nadu resident with Kerala connections, who had allegedly smuggled it from Coimbatore. In the course of investigation, it was learnt that two city-based criminal gangs are into drug business and the consignment would have come for them.

The ringleader is staying outside the state and he used to send the consignment in bulk which was distributed among retail sellers. The police suspect that the key members of the racket communicate with each other through dark web as it was found that they were not using mobile phones to contact others. Hardly after two days, a Uber driver named Sampath was found murdered at Chackai allegedly by these gangsfor providing the tip-off of the ganja smuggling to the police. 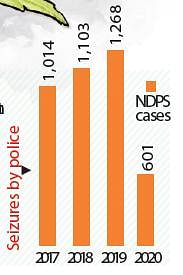 In May this year, in one of the biggest ganja hauls reported here in recent times, the excise enforcement squad seized around 650kg of ganja in two consecutive days in a successful operation from Mukkampalamoodu on the rural outskirrts of the state capital and arrested two youths.

Excise Circle Inspector T Anikumar, who headed the operation, said the seized contraband was worth `2 crore in the market. He said the arrested persons were regular carriers of the contraband from neighbouring states and they were employed by a gang comprising Sreekariyam natives now settled in Bengaluru. The contraband was procured from Rajahmundry in Andhra Pradesh and brought to the state via Chennai.

Eight months ago, the excise seized 203kg of ganja costing over `1 crore, smuggled from Andhra Pradesh to Kerala. Three men, including a murder accused, were arrested by the excise.  The ganja in brown packets was hidden in two cars in which the accused were traveling from Andhra Pradesh to Kerala via Bengaluru. The consignments were seized after the excise officials intercepted the cars at Balaramapuram in Thiruvananthapuram.

This was reported a few days after the biggest ganja haul reported in a day. Around 500kg of ganja was seized by excise officials from a container truck in Attingal. The contraband was hidden in secret chambers in the truck and sealed in packets. The hidden chambers were found on top of the driver’s cabin.

According to Deputy Excise Commissioner D Balachandran, the huge quantity of ganja being smuggled into the state shows the high demand for cannabis among youths. “There has been a rise in ganja abuse. I can’t tell if it is because of the lockdown. But the seizures indicated that the demand is higher in the district. However, the excise has been on the job by forming more special squads to nab the peddlers. In Thiruvananthapuram, the increasing incidents are due to the state sharing the border with Tamil Nadu.

The carriers used to smuggle ganja from other states through porous borders. In some instances, the peddlers used to store ganja at many places near borders to procure them for transportation in the state. We are primarily focusing on bringing down the demand for the narcotic substance here. As part of it, we have started online awareness classes for school students, especially adolescents, to keep away the clutches of the ganja mafia,” he said.

Modus operandi
Excise Circle Inspector T Anikumar who led many operations said there is a big network behind the ganja supply in the city as well as in the state. He said the peddlers are making quick bucks by transporting ganja from Andhra Pradesh which has lured others also to the trade. The arrested persons used to operate the ganja supply even in jail, he added. 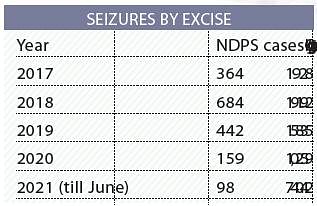 “Recently, we seized ganja from a car at Balaramapuram and arrested a person. Upon interrogation, he revealed that he was given instruction from a notorious criminal who was lodged in Poojapura Central Jail in connection with a narcotic case. Since the jail inmates are allowed to make calls to two close relatives, he called his wife and made a conference call to contact the carrier. Immediately after the carrier’s arrest at Balaramapuram, this jail inmate called another person informing the latter about the arrest. We found this tracing the mobile phone tower locations,” he said.

He also said the excise will oppose the bail applications of the accused as they form new networks in jails by befriending other inmates and convincing them about the large profit in ganja trade.

Police too on vigil
Deputy Commissioner of Police Vaibhav Saxena said, “The recent incident at Chackai clearly indicates two facts -- there is a huge demand and notorious goons are involved. The city police have managed to seize at least 350kg of ganja  in the last three to four months. Kerala is not a producer of ganja. Once the ganja reaches here through Kanyakumari border, it will be divided into smaller quantities to escape detection by the police. However, we have come to know that one person outside the state is operating the entire ganja supply in the city.” However, the police face an uphill task when it comes to tracing the source because the racket is not confined to a specific area. The police said they won’t be able to wipe out the entire racket as long as the demand exists. The cops are on the lookout for informants to trace the sources of supply in the city.

The recent seizures of ganja point to increasing demand for the contraband in the city. Equally worrying is that while the number of foiled smuggling attempts could be less than in previous years, the quantities have been much larger in each attempt since the lockdown. It shows many more have become peddlers to make a fast buck. Porous borders add to the headache of excise and police

Now we are on Telegram too. Follow us for updates
TAGS
Drugs Thiruvananthapuram