The State government has prepared a summer contingency plan with an outlay of Rs 103.82 crore to mitigate drinking water shortage.

VIJAYAWADA: The State government has prepared a summer contingency plan with an outlay of Rs 103.82 crore to mitigate drinking water shortage. In a statement issued here on Thursday, Panchayat Raj and Rural Development Minister Nara Lokesh said the funds will be spent on transportation, hiring of private sources, flushing/deepening of borewells and filling of Summer Storage Tanks.Stating that water is being transported to 510 habitations through tankers at present, he said the number may go up to about 2,000 by June. 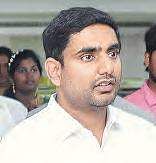 Stating that the GPS-enabled mobile application is being implemented for online tracking and monitoring of drinking water supply through tankers and assessing the actual trips on real-time basis, he said the state-of-the-art app was installed in mobile phones of tanker drivers.  They have to  upload  photos of tanks before and after filling them. They will also upload  photos taken  during transportation and distribution of water to desired location. In all, six photos from source to destination will be geo-tagged automatically.

Now we are on Telegram too. Follow us for updates
TAGS
water shortage