As part of the plan, top priority would be accorded to desilting of drains, rivulets and canals in Vijayawada.

VIJAYAWADA: Aimed at eliminating water-logging and flood-like situation, the Vijayawada Municipal Corporation (VMC) has drafted a comprehensive action plan at an estimated cost of Rs 3 crore to mitigate problems stemming from monsoon. As part of the plan, top priority would be accorded to desilting of drains, rivulets and canals in Vijayawada. 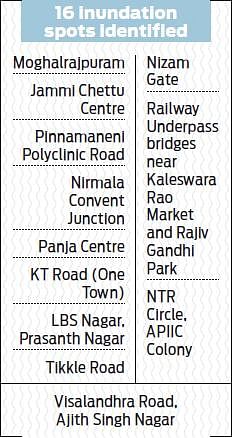 Speaking to TNIE, VMC chief engineer D Mariyanna said the city’s drainage network is 1,302.6 km-long, of which major drains make up to 57.6 km. “Even during the fight against a pandemic, the civic body has carried out special drives to desilt the clogged drains as part of the pre-monsoon preparedness. Till June 5, the civic body has completed desilting works in 20 km of major drains, 417 km of medium drains and 800 km of minor ones. The remaining work will be completed within a fortnight,” he said.

The officials informed that the VMC has identified 16 inundation spots in three administrative circles. To avoid stagnation of rainwater, it has also procured 20 motors of five and 10 HP capacities at Rs 8 lakh. “Apart from that, the VMC has also commenced a project to divert floodwater near Jammi Chettu Centre and One Town into Krishna Eastern Main Canal at an estimated cost of Rs 2.5 crore,” he added.

When asked if the floodwater diversion pollutes the canal, Mariyanna maintained that the project is only meant for preventing the localities in One Town from getting inundated during the monsoon and it has the necessary approval from the pollution control board.

‘’Though the civic body has drafted an action plan to tackle the problems during monsoon, disposing of garbage is a major concern. Only 50 per cent of the works related to stormwater drainage project are completed. Municipal Commissioner V Prasanna Venkatesh held talks with the authorities to resume the ongoing projects, which were stalled during lockdown,” the chief engineer noted.

Now we are on Telegram too. Follow us for updates
TAGS
Vijayawada monsoon plan Vijayawada D Mariyanna