As part of the initiative, a team of doctors conducted health check-ups on 1,000 workers and blood samples of those above 50 years were collected.

VIJAYAWADA: Seven sanitation workers recently tested positive for Covid-19 in Vijayawada. All of them are below 50 years of age and don’t have any travel history, Vijayawada Municipal Corporation chief medical officer for health Shalini Devi told TNIE, adding that they contracted the virus while at work.

It may be recalled that the VMC, with the help of St Anne’s Hospital, launched a week-long free medical camp at Tummalapalli Kalakshetram on June 6 to screen sanitation workers engaged in the containment of the virus.

As part of the initiative, a team of doctors conducted health check-ups on 1,000 workers and blood samples of those above 50 years were collected. 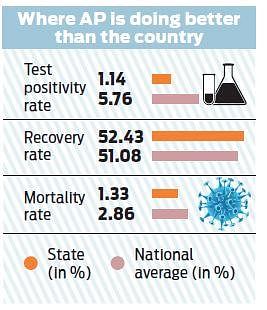 Six of the infectees, all of whom were deployed in Moghalrajpuram, are women, Shalinin Devi added.
Meanwhile, 28 new cases of Covid-19 were reported in Krishna in the last 24 hours ending Monday 9 am, pushing the district tally to 757. Official sources said 22 infections were reported from Vijayawada alone, while the remaining were from Machilipatnam revenue division.

As four employees of a showroom in Besant Road have tested positive, police imposed restrictions again and directed traders and street vendors on the stretch to keep their businesses shut till June 30.Five infectees in Machilipatnam are from a family residing in Sarkarvari Thota. The other patient is from Sulthan Nagar, taking the total cases in the revenue division to 41 cases, the officials added.

In a review meeting held at his camp office here, Krishna collector A Md Imtiaz directed the officials to focus on vulnerable groups and collect 3,000 samples every day. While 2,500 tests would be sent to viral research laboratories, tests on 500 remaining will be done through TrueNat machines. During the meeting, health officials informed Imtiaz that nine new patients were admitted to the recently-launched Covid-19 hospital in Ibrahimpatnam.

Stay up to date on all the latest Vijayawada news with The New Indian Express App. Download now
TAGS
Vijayawada Vijayawada Municipal Corporation