Initially, officials said the flyover would be inaugurated on September 4.

VIJAYAWADA: The much-awaited inauguration of the Kanaka Durga flyover has been postponed once again. Residents of Vijayawada have been waiting for the opening of the flyover, which will ease traffic as vehicles plying on the Vijayawada-Hyderabad highway (NH-65) will take the flyover instead of passing through the city.

Initially, officials said the flyover would be inaugurated on September 4. But it was postponed due to national mourning observed following the death of former President Pranab Mukherjee. Later, it was decided to inaugurate the flyover on September 18 by Nitin Gadkari in the presence of Chief Minister YS Jagan Mohan Reddy in virtual mode. But with Gadkari testing positive for Covid-19, there were doubts over whether the programme would be held. 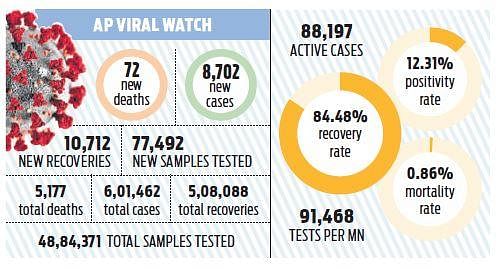 Now we are on Telegram too. Follow us for updates
TAGS
Kanaka Durga flyover Vijayawada