My mother is more Indian than many people I see: Rahul Gandhi

"This election is not about Rahul," the Congress president said.

"I have now learnt to deal with the prime minister. When he can't respond, he distracts," Gandhi told reporters here after winding up his extensive tour of poll-bound Karnataka.

Gandhi was responding to Modi's scathing attack on him after he declared his prime ministerial ambition.

At his election rallies, Modi had wondered whether the country will ever accept such an "immature and naamdar (famous)" leader for the post.

He also said Modi sees a 'threat' in him.

"Modi has anger inside. he has anger for everybody, not just me and sees a threat in me," Gandhi said. 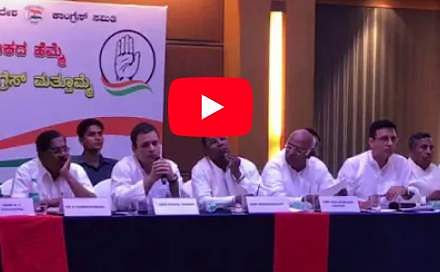 Expressing confidence that the Congress would win the assembly polls in Karnataka on May 12, he said the opposition had restricted itself to making personal attacks during the campaign.

The BJP, he said, feels "uncomfortable" when he visits a temple.

"My mother is Italian. She has lived a large part of her life in India. She is more Indian than many people I see," he said.

The Congress president added that our foreign policy has been decimated.

Now we are on Telegram too. Follow us for updates
TAGS
Rahul Gandhi Sonia gandhi Karnataka polls