Some of the most iconic scenes in Richard Attenborough’s Oscar-winning 'Gandhi' were filmed at the centuries-old Patna Collectorate, a heritage building now in a state of limbo.

PATNA: Some of the most iconic scenes in Richard Attenborough’s Oscar-winning 'Gandhi' were filmed at the centuries-old Patna Collectorate, a heritage building now in a state of limbo.

The residents rued that the collectorate -- immortalised in the film -- faced an uncertain future. And Gandhi's birth anniversary evoked memories of the film being shot in the building, which doubled up as the Motihari jail and court.

The British director was a stickler for detail, which was why he and his crew arrived here in the 80s for recreating Gandhi’s tryst with Bihar during the Champaran movement.

Many city residents still fondly recall the crowd that had gathered outside the Dutch-era Record Room or “the artificial rain” being created in front of the British-built DM Office during the shooting of the biopic.

Among them was Patna resident M Nath, who, intrigued by the crowds, stopped to find out what was happening, and ended up witnessing the shoot.

He recalled that Attenborough wanted to shoot in Champaran, but had to recreate some of the scenes in Patna.

“The now famous ‘Gandhi Setu’ connecting the north and south Bihar hadn’t been built then so it was difficult to take the huge cameras along with the crew to the other side on a boat. Thus the Collectorate’s Record Room was dressed up as Champaran Jail, where the character of C F Andrews is shown entering to meet Gandhi,” Nath said. 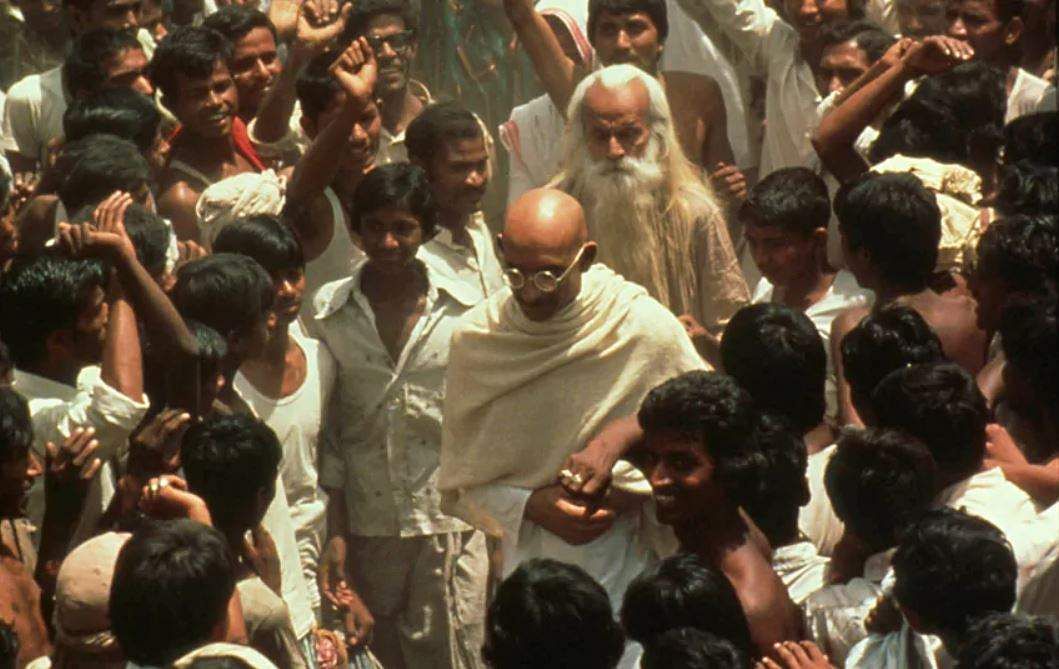 Shooting in Patna also helped because the team was short on time, he said.

"I saw Attenborough, a quiet man, instructing his crew for the shots. A huge crowd had gathered at the Collectorate by then, but he was a focused director,” he said.

The Collectorate campus, built over different periods, includes a part that was erected by the Dutch in the late 16th century. It also comprises the District Board Patna (DBP) building, set up in 1938.

The Bihar government last year had proposed to demolish the Collectorate to make way for a high-rise complex, triggering a public outrage.

Heritage body INTACH, along with several members of civil society, including eminent historians, architects, former bureaucrats and judges, and the London-based Gandhi Foundation, had separately written to Chief Minister Nitish Kumar, urging him to spare the building.

Kumar had then set up a panel to reconsider the decision.

The fate of the Collectorate, which sits on the banks of the Ganga, however, still hangs in balance, amid renewed appeal by people to restore the heritage building complex and adaptively reuse it as a cultural hub.

For Patna residents, the building evokes memories of the Ben Kingsley starrer. DBP employee Devendra Kumar, who was nine when the film was shot, said the District Magistrate's office was also used for the Motihari court scene.

"People who had gathered as extras were chanting ‘Gandhiji’ as one sees in the film," he said.

It was the trial at the magisterial court in Champaran's Motihari and Gandhi’s triumph in it that saw him transform into a national crusader -- and be known as the Mahatma. The Champaran Trial completed its centenary on April 18.

Gandhi started his Champaran satyagraha on behalf of oppressed Indigo farmers. He refused to leave town when he was asked to do so, and was served with a court summons.

The Bihar government in April launched the centenary celebrations of the Champaran satyagrah, but ironically, the Collectorate has not been included in the plan.

"It is a shame that first the Collectorate battled a demolition move, and now in the scheme of the grand satyagraha centenary celebrations, it has not even been mentioned, let alone celebrated. The film 'Gandhi' itself is a heritage for us," said Anil Kumar, professor of Ancient Indian History at Visva Bharati University in Santiniketan, West Bengal.

He pointed out that the Motihari courtroom scene was the moment in history that turned Gandhi into Mahatma.

"So this was the most befitting moment to declare the Collectorate as a heritage structure and link it with a Gandhi circuit," he said.

A civil society-led movement 'Save Historic Patna Collectorate', which started in April last year, is fighting for its preservation.

The Collectorate featured as one of the heritage buildings of the city in the Bihar government's Art and Culture Department publication, "Patna: A Monumental History" a few years ago.

“Endowed with high-ceilings and hanging skylights, the Patna Collectorate, along with Patna College and what remains of an opium godown at the Gulzarbagh Press, are some of the last surviving signatures of the Dutch history of Patna. And the ‘Gandhi’ connect makes it a legacy even more worthy of preservation,” Kumar said.