Singer Adam Levine has apologised for his mistaken takedown of MTV for not nominating Childish Gambino for the 2018 MTV Video Music Awards.

LOS ANGELES: Singer Adam Levine has apologised for his mistaken takedown of MTV for not nominating Childish Gambino for the 2018 MTV Video Music Awards.

The Maroon5 lead singer had posted an open letter after he thought that Gambino had missed out on nominations at the VMAs, when in fact the actor-musician had garnered seven nods for his song "This Is America".

"This year, Childish Gambino released one of the most impactful, thought provoking and intelligent videos ever made. I'm sure he doesn't' care that he wasn't nominated for a VMA because he's cool as f**k and everything," Levine had said in his open letter.

Shit. I don’t usually put my foot in my mouth. But this time, I did. ‘This is America’ actually WAS nominated for 7 VMAs. How I didn’t get the right info is beyond me. I stand corrected. I’m sorry MTV. Still hate you though. but mostly, I’m sorry.

"But I care. Because I'm not that cool. And I still want MTV to mean something again. But it won't. Ever," he added. 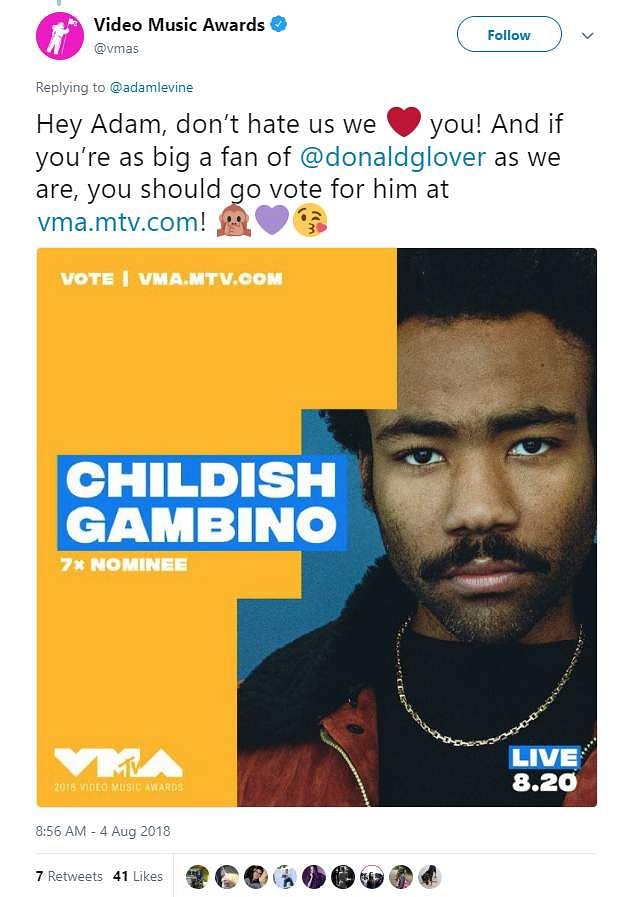 'This is America' actually was nominated for seven VMAs. How I didn't get the right info is beyond me. I stand corrected. I'm sorry MTV. Still hate you though. But mostly, I'm sorry. "

He also posted a new video on Instagram and explained exactly what happened.

So, here's what happened: Yesterday I was running around like a maniac, trying to leave town, packing, going a mile a minute, and I guess it had come up that at the VMAs, 'Girls Like You' -- which is our song-- isn't up for a VMA. Big shocker. It doesn't surprise me. They always blow us off."

"And then, of course, I'm like, 'Well, Childish Gambino made the best video of the year. I bet you he's not nominated.' I guess, for some reason, I Googled something and looked like. oof. Look, I f**ked up. There's no way around it.

But, basically, he was nominated, like seven times over, and I look like a moron. My bad. Sorry, MTV. You did good. Now, make sure he wins," Levine said.

Stay up to date on all the latest Entertainment English news with The New Indian Express App. Download now
(Get the news that matters from New Indian Express on WhatsApp. Click this link and hit 'Click to Subscribe'. Follow the instructions after that.)
TAGS
Adam Levine 2018 MTV Video Music Awards MTV Childish Gambino