Hollywood actress Halle Berry offered a fascinating insight into Prince Harry's boarding school dorm room, and the Duke of Sussex appeared to be like any other teen.

NEW DELHI: Hollywood actress Halle Berry offered a fascinating insight into Prince Harry's boarding school dorm room, and the Duke of Sussex appeared to be like any other teen.

The wall of his room was decorated with posters of scantily-clad models and a sweet tribute to his late mother, Diana, Princess of Wales.

The 'Catwoman' star took to Twitter to unveil a resurfaced photo from 2003 of the young royal at Eton College, writing, "Ok #PrinceHarry, I see you! #HalleBerryPosta."

Twitterverse had mixed reactions to this revealation. 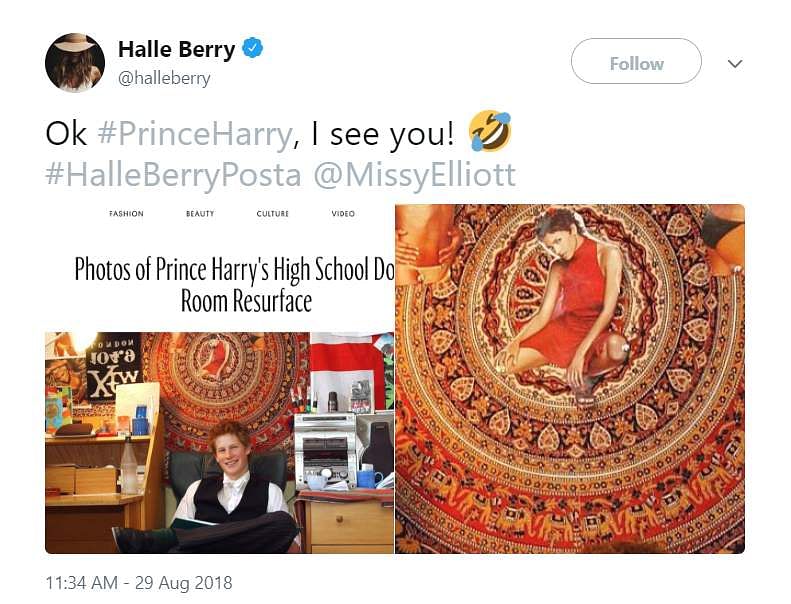 A user wrote, "I love that Prince Harry had an atypical hippie tapestry hanging in his dorm room. I love even more that Halle Berry spotted herself on the said tapestry.''

Talking about the love between Prince Harry and his mother, a user wrote, "The fact he has that beautiful picture of his mum on his desk warms my heart."

"@KensingtonRoyal Cheeky @halleberry! Cute room, we all remember #PrinceHarry from these days. :)," wrote another user.

Another user said, "The man always had good taste apparently!"

Stay up to date on all the latest Entertainment English news with The New Indian Express App. Download now
(Get the news that matters from New Indian Express on WhatsApp. Click this link and hit 'Click to Subscribe'. Follow the instructions after that.)
TAGS
Halle Berry Prince Harry