Notes on the Oscars

As you read this copy, the Academy Awards might have been announced. If you are like us, you would be cross-checking to see if your predictions came true.

As you read this copy, the Academy Awards might have been announced. If you are like us, you would be cross-checking to see if your predictions came true. Meanwhile, people will also be reading between the lines of acceptance speeches for signs of political allegiance. Like you, we too are excited about the Oscars. Here is Sudhir Srinivasan (SS), Ashameera Aiyappan (AA) and Avinash Ramachandran (AR)  with the Oscar round up.

AR: Let’s start off with the Best Picture nominees?
SS: It’s curious, isn’t it, that while there’s a bigger pool of Best Film nominees, the Best Director nominees aren’t allowed to exceed five. AA: I think this can be attributed to the Academy’s aim to include the more ‘commercial’ ventures into the fold.

AR: Something like a consolation prize of sorts?
SS: (Laughs) The problem, as we can see, is someone like Greta Gerwig (Little Women) not getting a Best Director nom despite the film being picked for several categories.

AR: Apart from women filmmakers not being nominated, another criticism made against the Academy, yet again, is the lack of representation in the nominations.
AA: The snubs for Lupita (Us), and Awkwafina (The Farewell) are pretty shocking.

SS: There is just one non-white actor who has made it to the acting nominations list (Cynthia Erivo for Harriet). Also among those unfairly excluded is Jennifer Lopez (Hustlers).I think the problem is, the perception of her as a singer might be causing people not to give due credit to her acting credentials.
AR: Ah, reminds me of that age-old generalisation of how models don’t necessarily make great actors. 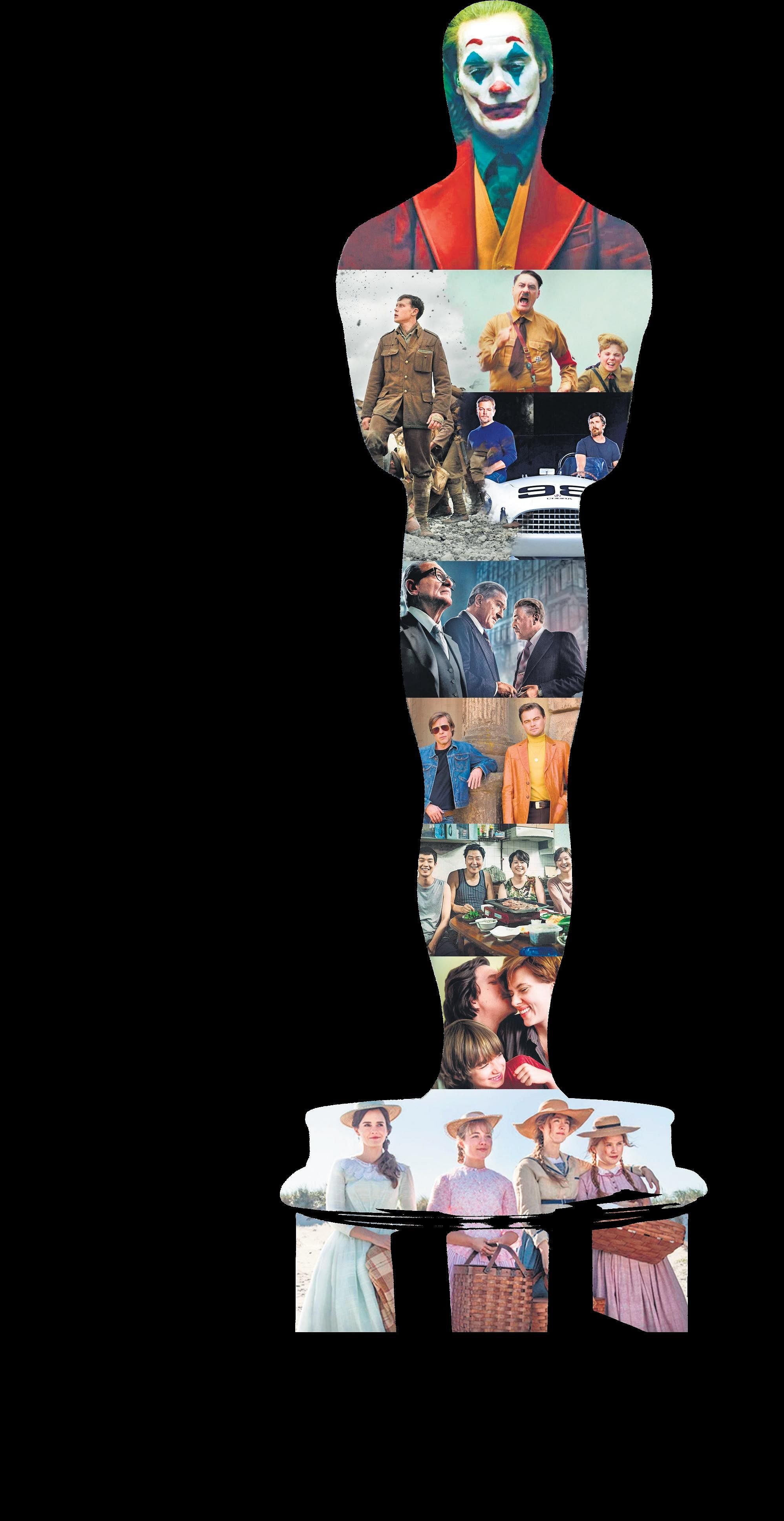 AA: This year’s nominations have taken the Oscars a step back, instead of forward, as it seemed in recent years.
AR: So, which film do you think will win?
SS: Unless its  a horrible surprise a la Green Book, this year’s winner has got to be between 1917 and Parasite. I root for 1917 because it made for a more emotional experience. Its technical excellence made it such an immersive film.

AA: My pick is Parasite. It made me think a lot. There is so much context to talk about, and I feel that hit me harder.
SS: I also see the acknowledgement of a South Korean film like Parasite to be a step forward. It reiterates that telling the stories about our people is enough, to help us reach far corners of the world.
AR: I think I will pick Ford V Ferrari mainly because... I loved that film. Also, I am not a big fan of films that dole out messages, be it in Korean, English, or in Tamil.
(laughter all around)

AR: With  the director nominees, I am intrigued about Todd Philipps transforming from being the guy that made Hangover, to the filmmaker who made Joker.
SS: It is interesting that
Joker, like Parasite, is a commentary on class struggle.

AR: One of the biggest criticism against Joker is the glorification of violence, and giving a sympathetic backstory to a psychopath.
SS: Today, we are quick to box perpetrators of any crime as  ‘animals’. It gets reduced to an us vs them narrative. It is important to make an attempt to understand them. Such stories help us to.
AR: But can we expect political correctness in a film with flawed leads?

SS: Yes. I think we should. If someone glorifies problematic behaviour, then it should be called out. But Joker was a tragedy that painted the portrait o a broken man. Its point is that society too is responsible in the making of a psychopath.
AR: One of the reasons why these political overtones were so convincing are the performances. Joaquin Phoenix seems to be a clear favourite for the Best Actor Oscar.
AA:  My pick too. It was a physical performance. I really loved how he consistently stayed in a zone that’s between laughter and sorrow.
AR: One could say what Joaquin did was ‘in-your-face acting’. How does one compare it with, say, Jonathan Pryce’s subtle yet effective performance from Two Popes?

SS: It is a tough question. We also have to acknowledge that a character like Joker lends itself to such dramatic performances. The subtle performances, I think, need to be extraordinarily good to compete with a conventional, in-your-face, obviously good portrayal.
AR: For the supporting actor (Male), you have Brad Pitt leading the race, while people like Tom Hanks, and Joe Pesci have been nominated. Is the flamboyance working there as well?

AA: Pitt’s performance was rather effortlessly charismatic. I think it’s the quite opposite of Joaquin.
SS: With the Oscars, it is sometimes about honouring a rich body of work. Pitt has been doing good roles now and like it was with DiCaprio, the mounting pressure to recognise him could work for him.
AR: Moving on to Best Actor (Female), interestingly, Scarlett Johansson has been nominated for both the best lead and supporting actor.

SS: I believe she has had a great year, and this is a reflection of it.
AA: My pick for Best Female Lead though, would have to be Renée Zellweger for Judy. It is another very physical performance where I couldn’t recognise her in the first few minutes of the film. .
AA: What about Best Supporting Actor (Female)? Will Laura Dern walk away with yet another trophy for Marriage Story?

SS:  It is hard to predict. But I am rooting for Florence Pugh (Little Women). Greta Gerwig has reinterpreted Amy’s character to create in us more empathy for her. With all the restrictions that women had back then, for women, it was about making the best choice among some thankless choices. Amy, in this film, does the same she does in the book —  everything that should essentially make her ‘unlikeable’. But Pugh’s performance stops you from hating her.

AR: I would go with Laura, even though I have a soft spot for Scarlett Johansson (Jojo Rabbit.) I believe Laura had the tougher role to pull off. While Scarlett had a more defined graph, imagine playing a lawyer, caught between a couple that is splitting up. To make such a restrictive role memorable is quite a task.

AR: Let’s move to the music. Joker’s score is leading so far. But we also have nominations for 1917, and John Willaims for Star Wars. Interesting trivia: Williams has been nominated 52 times so far.
AA:  That’s amazing. The score that affected me the most was Hildur Guðnadóttir’s work for Joker. In fact, the scene where Joker dances in the bathroom is an improv reaction after Joaquin listened to Hildur’s score. That’s the effect it had on me as well.
AR: I believe that leaves us with cinematography, where Roger Deakins seems to be a clear favourite.
SS: Give him the award already.

Stay up to date on all the latest Entertainment English news with The New Indian Express App. Download now
(Get the news that matters from New Indian Express on WhatsApp. Click this link and hit 'Click to Subscribe'. Follow the instructions after that.)
TAGS
Oscars Joker Parasite Brad Pitt