All the Old Knives is based on a book of the same name by Olen Steinhauer. The author has adapted it for the screen.

Jonathan Pryce and Laurence Fishburne have been roped in for Amazon Prime Video’s espionage thriller, All The Old Knives, directed by Janus Metz (Borg vs McEnroe). Pryce and Fishburne join the cast that is headed by Chris Pine and Thandie Newton. 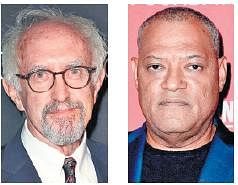 All the Old Knives is based on a book of the same name by Olen Steinhauer. The author has adapted it for the screen. The story follows ex-lovers Henry (Pine) and Celia (Newton), one a CIA agent and the other an ex-spy. They meet up for a dinner and discuss their times together.

The conversation steers towards a disastrous flight hijack which the CIA could not stop. Henry decides to find out what exactly happened back then. Pyrce is known for his work in the Pirates of the Caribbean franchise, The Wife, and Game of Thrones. He recently bagged an Oscar nomination for The Two Popes. Fishburne is famously known for playing Morpheus in the Matrix film series.

Now we are on Telegram too. Follow us for updates
TAGS
Jonathan Pryce Laurence Fishburne All The Old Knives