Baadshah was an under-rated film

Director Duo Abbas - Mustan will launch Mustafa in their upcoming film, Machine, which they describe as a romantic thriller.

Ahead of the film release, the duo believes that high expectations often lead to disappointment and Baadshah was the victim of audience expecting another Baazigar-like thriller from the duo.
In a conversation with us, Abbas Mustan spoke about the film and much more. 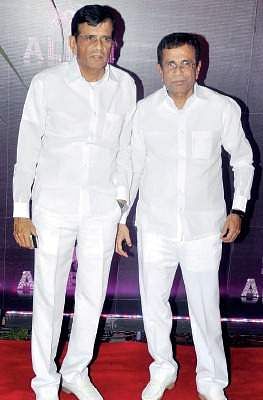 Was the script of ‘Machine’ written keeping Mustafa in mind?
We don’t think about the star-cast while writing a script. When you write a script keeping a particular actor in mind, you can’t do justice to the character.

Mustafa has assisted us in three films, Race 2, Players and Kis Kisko Pyaar Karoon and we decided to cast him only after testing his acting skills. The character has multiple layers and it demanded a new comer. A new comer never has a set image, so it gets easy for him to be the character.

You have been in this industry for over 25 years and still delivering successful films.....

It is all by the grace of god. We believe that if you work hard and concentrate on your work with passion and dedication and keep yourself updated in today’s time, nothing can stop you from being successful. You need to make films as per the demand by youth as it is essential to cater to that section of audience.

Which is one of your most under-rated films and why?
We think Naqaab is one film which could have been better. It was a very interesting subject but we regret that we could not tap the full potential of that subject.

If you ask us about an under-rated film, it has to be Baadshah. We think it was a very well made film but it didn’t do that well because of high expectations. We were teaming up with Shah Rukh Khan after Baazigar and given the title of our film, people expected something on the lines of Baazigar. When people went inside the cinema hall expecting Baazigar but got served with a comedy, it left them disappointed.

Do you believe in the saying ‘film was ahead of its time’?
There are many films which are ahead of their time or there are a few films which release with unrealistic expectation from the audiences.

High expectations often lead to disappointment but it does not mean that the film is bad. When people watch that particular film on television with no expectations, they tend to like that film. The audience response to a film depends on their
expectation.