‘Getting success and being successful are two different things’

The actor talks about his upcoming movie Badrinath Ki Dulhania, delivering seven hits in a row and playing a double role in Judwaa 2

Varun Dhawan and Alia Bhatt made their debut with Karan Johar’s Student Of The Year in 2012. Since then, they have m oved on with other roles.

While Alia went on to prove herself with Highway, Udta Punjab and Dear Zindagi, Varun did gritty roles in Badlapur and Dishoom. Now they are back together with their next romcom Badrinath Ki Dulhania, a sequel to their film Humpty Sharma Ki Dulhania.

“Alia is the most challenging co-star I have ever worked with. We have a competitive relationship, and when we act, we have that friction. We come from different schools of acting. I love to improvise on the sets. I keep adding my own lines. We have a healthy competition. We don’t agree on everything, and she pushes me to do better. It’s our third film together. I don’t have this relationship with any other co-star.”

Varun says he wanted to work with director Shashank Khaitan again when he was doing Humpty Sharma Ki Dulhania. “There are very few people who change you for better. Shashank is a Buddhist and looks at the world in a better way. He looked at my whole life span and we became pretty close. Alia also wanted to work with Shashank. He had written another film and suddenly this script came up.”

Varun says Shashank did a lot of research for the role. “He travelled extensively and shot videos of actors from Uttar Pradesh to brief me about the role. I had to work on my accent too. I was weak in Maths in school and Shashank had once asked me about it. He made use of it in the movie,” he says.

Varun has had seven hits in a row, but he looks at stardom with humility. “I don’t know about stardom, but the way families and my fans react is amazing. Getting success and being successful are two different things. My dad (David Dhawan) made 48 films and was very successful.

He came from a non-film background. My grandfather was a bank manager. My dad fought his way to success and made it big in films. I want people to like me and the characters I play, not because I look good or am a hit on Instagram. Initially, people liked me for my chocolaty looks,” he says. 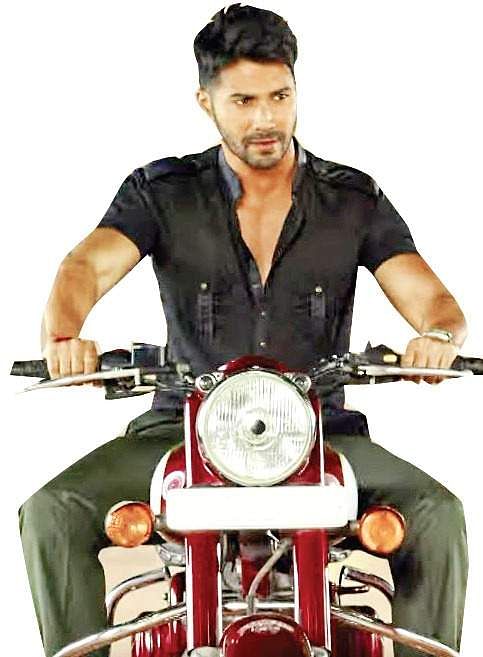 Varun says every actor faces pressure when a film is a hit at the box-office. “It can become a lonely period for an actor as you are only thinking of the film. We can’t sit and watch the film with the audiences in theatres,” he explains.

How does he deal with pressure ? “It’s not easy, and every actor will tell you that. The only way to deal with it is to start working on another film.”

He is excited about the films he has. “I have Judwaa 2. Dad wanted to see me in a double role. He used to say that real test for an actor is a double role. He had discussed this with producer Sajid Nadiadwala and now it has finally taken shape.

This film was challenging and I am sure that a double role will also be challenging for me. I am not trying to recreate, it is a new take. It will be very different. I’m sure Salman Khan will like it. We are trying to make something different. You cannot keep doing the same things. It becomes monotonous. I came into this field because I didn’t want to do anything monotonous.”

About Govinda’s recent outburst against his father, Varun says, “I’ve met Chi Chi bhaiyya (Govinda) many times. My father and he should get together and sort it out. My dad has also struggled; he also came from a non-filmy background. It’s not for me to intervene. If someone says let’s make peace, I can talk.”

Has Varun met choreographer Saroj Khan, who lashed out at the Tamma Tamma remake? “I want to meet her and say sorry. I’ve been inspired and love her songs, but definitely the song is Madhuri (Dixit) ma’m and Sanjay Dutt’s song too, and they have loved and encouraged us,” he says.