Greater than the sum of its parts

Anvita Dutt’s scripts always highlight similar underlying themes. They attempt satire without declaring themselves to be so. They pick out and laugh at Hindi film traditions. Even her lyrics. Like her songs in Queen, specifically London Thumakda. Her film Shandaar was a different kind of trip. It attempted satire on wedding videos and traditions masquerading as a Bollywood film.

They either hit the right spot (like London Thumakda) or they spectacularly fail (like Shandaar). But there is always something alive and biting inside them. Phillauri, her latest script has such moments strewn all over. Phillauri, directed by Anshai Lal, may be uneven but it is fully committed to its fantasy. Like most of Dutt’s work. 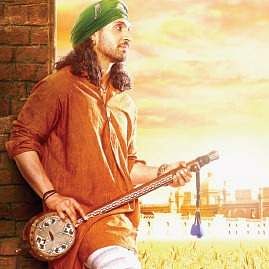 It slots itself into fantasy drama. Or is it fantasy romance? Some part of it is indeed fantasy romance of the kind we don’t see anymore. It reminds us of Imtiaz Ali’s Love Aaj Kal where he drew parallels (or lack thereof) between today’s young urban romance and the romance situated during a different time.

Dutt begins with what she can do best - an exaggeration that is rooted in everyday reality - a marriage between a man and a tree. Kanan (Suraj Sharma) is the hero of today’s frivolous romance who is forced to marry a tree before his actual wedding with Anu (Mehreen Pirzada, the performer of the film given an unforgiving role) thanks to the position of heavenly bodies in his horoscope.

The romance set in pre-Independence India is mythic, or you could call that heavenly. Suitably referencing Mirza-Sahiba to reinforce its nature, this is the story of Shashi (Anushka Sharma) and Roop Lal (Diljit Dosanjh). Kanan, who is unsure just about everything in life, by way of plot, gets married to Shashi’s ghost, who appears all decked and glittery in front of him. Lal stretches some of the comedic bits too long but the banter between Kanan and Shashi mostly works.

There is nothing new or engaging in the individual love stories but Dutt and Lal establish that the focus was always on marriage between the two narratives. The theme of marriage or wedding is always at play. There is an impending wedding. A wedding (and marriage) never happened.

Kanan is unsure about his decision to marry Anu in the days leading up to his wedding. Shashi was never fortunate enough to be in Kanan’s position. She was destined to be with Roop Lal. Then, as a ghost, she gets married to Kanan. Shashi was a poet. Roop Lal was a singer who gave life and wings to Shashi’s words. Kanan comes across as a version of Honey Singh lost in an acappella group.

Did I mention he is confused about everything? The romance of then is played up for its purity, or even divinity, considering the after-life narrative. Anu at first comes across as a stock character. She uses the words “go around” instead of dating. She and Kanan have been “going around” since tenth standard. It seems like her worldview hasn’t changed since that age but slowly we see how she is not dumb. She is just another person who always knew what she wanted - Kanan, a big wedding, a happy marriage. How both Shashi and Kanan slowly realize this, makes the film. It’s lovely, even if predictable, the way a record player plays a part in the two love stories.

The full length of the trip is hardly engaging.
definitely deserved a better director. Scenes take too long to get to their logical end. A lot about ones like or dislike of Phillauri may depend on how much one is willing to buy into Dutt’s two narratives, bad graphics notwithstanding. Some of it - the meet-cutes and the family wedding drama - is too plain to even bother with. Even Anushka Sharma seems dispensable (beyond the,”this film needs a star so what do we do?”). Evidently, Phillauri is greater than the sum of its parts.