District and Sessions Judge Ravindra Kumar Joshi heard the arguments of prosecution and defence which lasted for about an hour and pronounced the order at around 3 pm, a defence counsel said.

JODHPUR: Bollywood superstar Salman Khan was released on bail from the Jodhpur Central Jail on Saturday, where he spent the last two nights after being convicted and sentenced to five years imprisonment in a 1998 blackbuck poaching case. District and Sessions Judge Ravindra Kumar Joshi allowed Salman’s plea for bail and suspension of sentence for a month so he can file an appeal against his conviction and sentencing.

READ | Qaidi no.106 Salman Khan given dal-roti in Jodhpur jail

Salman was granted bail on furnishing a bail bond for Rs 50,000. His lawyers were also asked to produce a Rs 25,000 surety from two persons each to guarantee that the actor will comply with all bail conditions. The court also said that Salman cannot leave the country without the court’s permission.

Fans waiting outside cheered as Salman Khan emerged from the jail, wearing a black t-shirt and a cap, with his bodyguard Shera waiting to escort him. Salman Khan directly went to the airport from jail, from where he is taking a chartered flight, back home to Mumbai.

The 52-year-old actor was sentenced to five years imprisonment on Thursday for killing two blackbucks -- an endangered species under the Indian Wildlife Act-- in Kankani village near Jodhpur in Rajasthan during the shooting of a multi-starrer, “Hum Saath Saath Hain”.

His co-actors Saif Ali Khan, Tabu, Neelam Kothari and Sonal Bendre, who were in the SUV that the Dabangg star was driving during their alleged late night hunting outing, were, however, acquitted and given “benefit of doubt” by the court due to lack of evidence.

During the hearing, the prosecution cited credibility of witnesses and forensic evidence to oppose Salman’s plea, saying the post-mortem report clearly stated that the blackbucks had gunshot wounds. However, Salman's lawyers argued that only the bones of the animals were sent for evaluation when their skins, as crucial, weren’t.

ALSO READ | Salman not alone, many Bollywood personalities have had brush with law

In his arguments yesterday, defence counsel Bora had said there were various loopholes in the investigation.

He had argued that no investigation in any of the cases of poaching proved that Salman used firearms.

He had told the court that the eyewitness in the case was "not reliable" and "it was never proved that he had firearms.

"Even the pellets recovered from him did not corroborate the story of the prosecution. Also, the first post-mortem report was completely dumped." Bora had also argued

"Besides this, he (Khan) has been acquitted in all the other cases of poaching on the basis of the prosecution's failure to prove the allegations and in such a condition, his sentence should be suspended."

Countering the defence counsel's arguments, public prosecutor Pokar Ram Bishnoi had urged the court to seek the record of the case from the trial court and go through it.

He had told the court that this was the only case where an eyewitness was available and the prosecution has succeeded in proving the crime beyond any doubt. 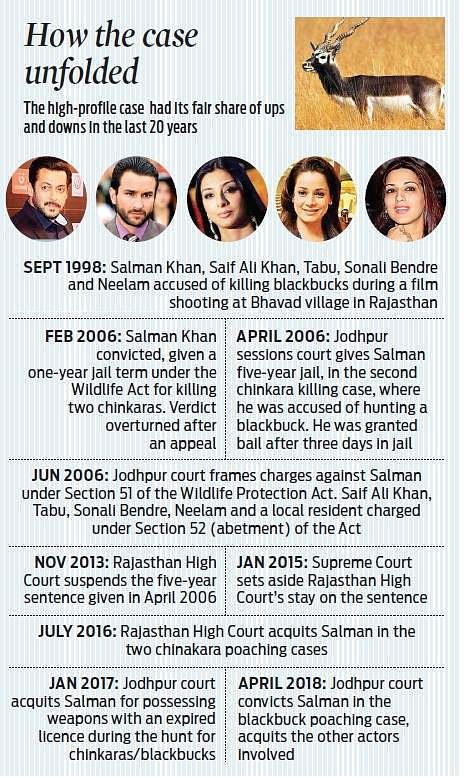 In a late development on Friday, an order was issued to transfer Joshi to Sirohi, as part of a reshuffle. He was among 134 judges transferred by the registrar general of the Rajasthan High Court. Judge Joshi, had an option of choosing to leave this case to his successor on account of his transfer order, but he chose to decide the matter.

Fans of #SalmanKhan gather outside his residence in Mumbai and celebrate following Jodhpur Court's verdict in #BlackBuckPaochingCase. The Court granted him bail in the case. pic.twitter.com/STrcQuihjY

Khan's sisters - Alvira and Arpita – had also come to the court for the hearing.

Director of Salman's upcoming film "Race 3" Remo D'Souza told PTI, "I am happy that he has got bail. After working with him so closely I have become a huge fan of him not only as an actor but also as a human being."

With an upwards of Rs 600 crore worth of major film projects under his belt, Bollywood was earlier shuddering at the prospect of the superstar spending five years in jail after Thursday's verdict.

"Almost 90 per cent of the shoot for 'Race 3' is over and the remaining portions will mostly be shot in India," he said.

Producer of "Race 3" Ramesh Taurani said he is "happy" that the actor will come out of jail.

Singer Adnan Sami, who composed the music of Khan's "Lucky: No Time for Love", said, "So happy for the bail of my dear brother Salman Khan. Relieved. Come home." JAI HO!"

Bihar: Rakhi sisters of #SalmanKhan Saba and Farah celebrate in Patna after he was granted bail by Jodhpur Court in #BlackBuckPaochingCase pic.twitter.com/9A9slOeHWy