Citizenship Act: Celebrities stand in solidarity with students after crackdown at Jamia, AMU

CHENNAI: The ongoing protests in several parts of the country against the Citizenship Amendment Act (CAA) took a violent turn when college students of Jamia Millia Islamia and Aligarh Muslim University faced a crackdown at the hands of the police.

This garnered heated reactions from celebrities including Bollywood stars and cricketers who took to Twitter and Instagram to condemn the act, with many saying that "violence isn't the solution."

Taapsee Pannu, Vicky Kaushal, Parineeti Chopra, Rajkummar Rao, Ayushmann Khurrana among others took to Twitter and Instagram to stand in solidarity with the students of Jamia and AMU.

Wonder if this is a start or the end. Whatever it is, this is surely writing new rules of the land and those who don’t fit in can very well see the consequences.
This video breaks heart n hopes all together. Irreversible damage,and I’m not talking about just the life n property https://t.co/QGaZYpDCR6

This is unreal. We are a secular democracy. This violence that the police have shown in dealing with the students is terrible. Citizens have the right to peacefully protest. @narendramodi @AmitShah Or that is not an option anymore ??

If this is what’s gonna happen everytime a citizen expresses their view, forget #CAB, we should pass a bill and not call our country a democracy anymore! Beating up innocent human beings for speaking their mind? BARBARIC.

I strongly condemn the violence that the police have shown in dealing with the students. In a democracy the citizens have the right to peacefully protest.I also condemn any kind of act of destruction of the public properties. Violence is not the solution for anything!

We are with the students! Shame on you @DelhiPolice

Non stop threats like this.. “Career chaupat kyon karna hai..” just go through my timeline and that proves how much of a democracy we have become((sarcasm (for dumb bhakts)))..also you can clearly see who are the goondas here and which side they speak for .. https://t.co/oP89GnIn9E

I stand in solidarity with the students of India. pic.twitter.com/OCl8gH276B

This is what we were, what we are and what we MUST remain! #neverforget pic.twitter.com/itmacCC9qV

My heart goes out to all the students back home in Delhi. In a democracy like ours, its sad to see violence against citizens for voicing their opinion through peaceful protests. There should be no place for violence of any form & intent in our country. I strongly condemn this act

Farhan Akhtar put up an Instagram story to condemn the act. 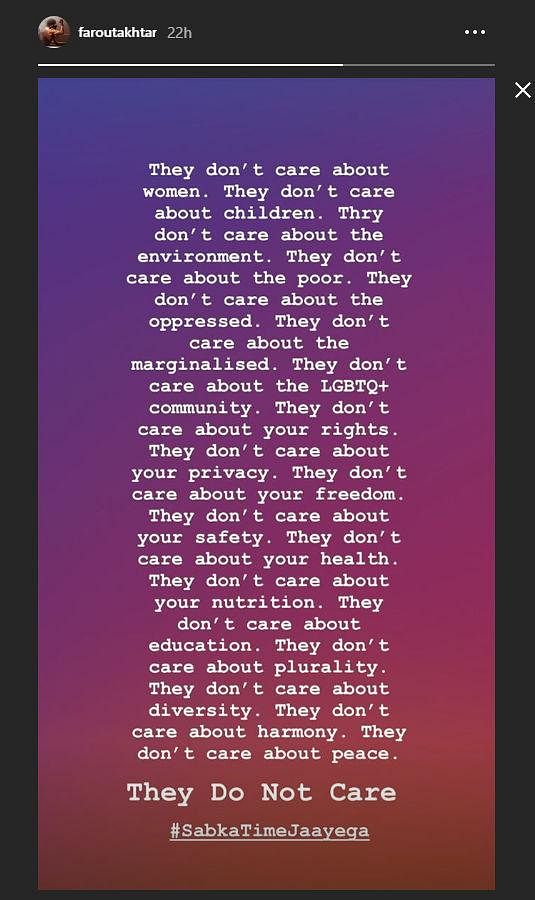 Cricketers like Aakash Chopra and Irfan Pathan also tweeted about the same.

Deeply disturbing visuals from educational institutions across the country. Teary eyed. They are one of us. These kids are the future of this country. We don’t make India great by silencing their voices with the use of force. You’ll only turn them against India.

Many different colleges including three IITs have also declared solidarity with Jamia and AMU students.