Naina is the prime accused in the murder trial of Arjun (Tony Luke), and it is up to Badal to help her clear her name.

Remakes are always tricky, especially when it is an investigative thriller. However, Sujoy Ghosh knows a thing or two about delivering a taut whodunit. And helping the filmmaker deliver a solid remake of the 2017 Spanish film, Contratiempo, is the impeccable Amitabh Bachchan as Advocate Badal Gupta and Taapsee Pannu as the cornered Naina Sethi. 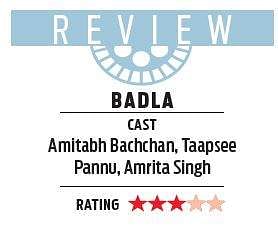 Naina is the prime accused in the murder trial of Arjun (Tony Luke), and it is up to Badal to help her clear her name. Naina is a high-profile businesswoman, who steadfastly argues that someone has framed her, and Badal is a hotshot lawyer, who has reasons to believe that she isn’t telling him everything. What makes the case even more interesting are the characters in the periphery — be it the missing man, or the dysfunctional relationship.

I liked how Sujoy teases the audience with hints throughout the film. He doesn’t want to deliberately confuse the audience but simply prods them to observe better. It gives you a sense of satisfaction, as though you were doing some solid detective work yourself.

Both Taapsee and Amitabh are in top form, and the oscillating power dynamics between the two makes for an engaging watch.

The performances of the supporting cast is impressive too. I am quite enjoying the second coming of actor Amrita Singh, who yet again, delivers a memorable portrayal as the grieving mother, Rani Kaur. Avik Mukhopadhyay’s cinematography and Monisha R Baldawa’s editing add necessary nuances to this chamber drama.