Mahatma Gandhi as a conscience keeper

Roy has been engaging with the same theme for ten years now. His first solo, on this theme, was in 2008 at London’s Aicon Gallery on the Mahatma.

The title of artist Debanjan Roy’s ongoing exhibition, Toying with Gandhi, is unsettling. The Mahatma, an instrumental figure in shaping India’s future, just can’t be taken lightly. But Roy, through his interplay with the title and displayed sculptures in the show, essentially wants to make people anxious about how few piggy bank on Gandhian ideologies, or worst, tread upon them. 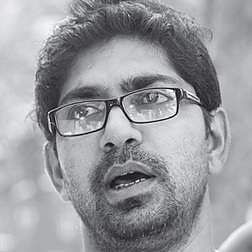 To drive home his point, Roy has made fibreglass and wooden dolls of Gandhi; a south Indian dancing doll, Superman, Russian Matryoshkas and Marionette dolls among others. His figurative sculptures additionally showcase pop art.

“Mahatma Gandhi spoke about many injustices inflicted on the people by the British. He also worked towards the betterment of humanity by trying to remove many social evils in the country. So why is it when people point towards a certain unfair policy by a political party, they are called unreasonable?” says Roy.

According to him, everyone has become a toy in the hands of central government. “It is so difficult to make people understand that one is not saying anything against a party but against its certain rules,” urges Roy.

The Kolkata-based artist also believes, Gandhi is not just a name, he is an idea.“From his time till now, it has been used by many people for their personal interests. At the end of the day, we realise that most of us are just toying with him.”

Roy has been engaging with the same theme for ten years now. His first solo, on this theme, was in 2008 at London’s Aicon Gallery on the Mahatma. It was called Who Knew? Mr. Gandhi. “Earlier I used to include my own face in my artworks but I felt that the Father of the Nation can represent a lot of voices from our country.”

He pointed towards the recent trend of adding Gandhi’s name to the surname by many. He says, “To use Gandhi’s name with one’s own name, one has to aspire to reach his stature. And this cannot be easily achieved.”

Roy grew up surrounded by negative publicity on the nationalist’s life but his opinions later changed after reading The Story of My Experiments with Truth, an autobiography by Gandhi, among other texts. The same show is also ongoing at New York’s Aicon Gallery.

Now we are on Telegram too. Follow us for updates
TAGS
Debanjan Roy Gandhi MK Ganndhi Gandhi Art The Story of My Experiments with Truth