NEW DELHI:  The Bihar Police on Friday informed the Supreme Court accusing its Mumbai counterpart of siding with actor Rhea Chakraborty and obstructing its probe into the Sushant Singh Rajput’s death by suicide and other related angles.

The Union Government, meanwhile, filed an impleadment application seeking to be made a party in the ongoing case filed by Rhea seeking transfer of probe from Bihar to Mumbai. In an affidavit, the Bihar government said that the Mumbai Police did not share crucial evidence of the case, obstructed its probe and forcibly quarantined Superintendent of Police, Patna-Central, Vinay Tiwari when he reached the city.

The affidavit came in response to a petition filed Rhea who sought transfer of the case filed by Sushant’s father KK Singh from Patna to Mumbai. “The non-cooperation by the Mumbai Police with the Patna Police is clear from the fact that the former has not supplied any documents such as inquest, post-mortem 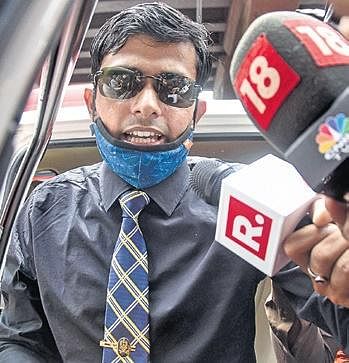 and FSL reports, CCTV footage etc to the latter, despite several requests,” the affidavit stated.

So far, the Bihar Police has recorded statements of 10 people related to the Rajput death case. The statements of Rhea or her family members, named in the FIR, have not been recorded yet. Bihar Police denied that it lacked jurisdiction to probe the FIR lodged by Rajput’s father, citing Section 179 of the CrPC which states that when an act is an offence by reason of anything which has been done and of a consequence which has ensued, the offence may be inquired into or tried by a court within whose local jurisdiction such thing has been done or such consequence has ensued.

Since Sushant’s father is a resident of Patna, the state police and courts have the jurisdiction to try the offence, the Bihar police asserted. Rhea Chakraborty’s petition is without jurisdiction, premature, misconceived and not maintainable, Bihar Police’s affidavit said.