The debutant actor took to her Instagram stories and described the two-month-long period, after Rajput's demise as 'treacherously painful.' 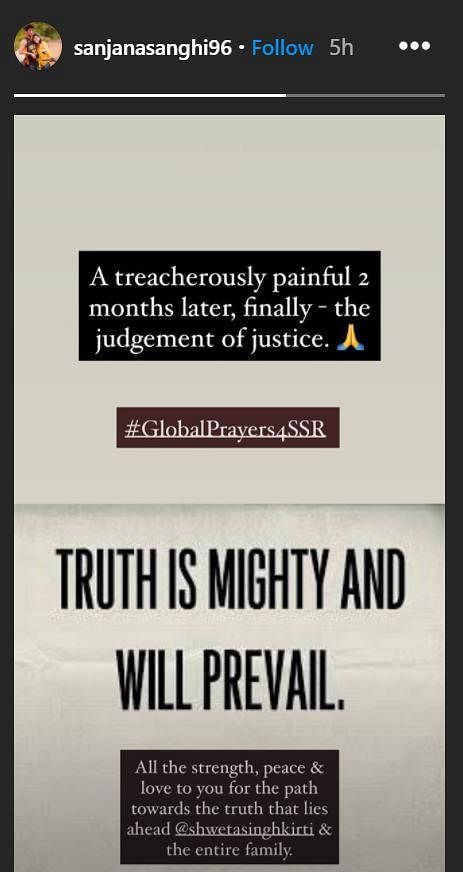 The debutant actor took to her Instagram stories and described the two-month-long period, after Rajput's demise as "treacherously painful."

"A treacherously painful 2 months later, finally - the judgement of justice. #GlobalPrayers4SSR. TRUTH IS MIGHTY AND Will PREVAIL," she wrote in the story.

Sanjana wished for the "peace" of the actor's family for the path towards the truth.

"All the strength, peace & love to you for the path towards the truth that lies ahead @shwetasinghkirti & the entire family," she wrote.

The Supreme Court on Wednesday ordered an investigation by the Central Bureau of Investigation (CBI) into Rajput's death, who was found dead at his apartment in Mumbai's Bandra on June 14.

The order came on actor Rhea Chakraborty's plea seeking to transfer the case filed against her in connection with the actor's death from Bihar's Patna to Mumbai.

The late actor's family has alleged that Chakraborty had abetted the alleged suicide of the actor and registered a case against her in Patna.

The case was later transferred to the CBI.