Ardha Satya will not be the title of my next film: Hemanth M Rao

Hemanth M Rao, who recently announced the title of his second film as Ardha Satya, last week, has decided to change it and go in for a new title.

Hemanth M Rao, who recently announced the title of his second film as Ardha Satya, last week, has decided to change it and go in for a new title. 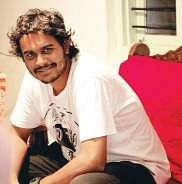 The filmmaker, who marked his directorial debut with Godhi Banna Sadharna Mykattu, is working with producer Karthik Gowda this time and for a project to be co-produced by Puneeth Rajkumar.

Speaking to City Express, the directors says, “I decided to change the title after learning that the same title had been registered by another filmmaker. So, I will be deciding on a new name soon.

Moreover, I don't want to get into any controversy because of the title, even though the Film Chamber gave be a go ahead.”

Hemanth is currently finishing the script and is in the process of finalising the cast. In all likelihood, Manish Rishi will play the lead.