Ganesh, a true blue fan of Vishnuvardhan, is keen on dancing to this track from Karna ; director Suni in talks with audio companies for Hindi and Kannada rights

Shooting for Ganesh and Rashmika Mandanna-starrer Chamak, directed by Suni, is on full swing and the last schedule of the film is to start from September 26 in Bengaluru. Meanwhile, the filmmakers have a plan to make it extra special for the Kannada audience, especially for the diehard fans of Vishnuvardhan, by planning to include a remix version of Preethiya Nan Husiru from the 1986 movie Karna.

This song, featuring Vishnuvardhan and Sumalatha, had music scored by M Ranga Rao and its original was the Hindi Pyaar Bina Chhen. Actor Ganesh himself is a true blue fan of Sahasimha, and the actor is keen on a remix of this for Chamak.

The director is now in discussion with two audio companies who hold the copyright for the Kannada and Hindi versions.

He says, “It is just the formality of getting the audio rights and, if all goes as planned, this song’s remix will be included in the Chamak’s album featuring Ganesh and Rashmika.”Chamak has Ganesh and Rashmika paired opposite each other for the first time, and Ganesh plays a gynecologist in this romantic comedy. The film made under Crystal Park Cinemas has music by Judah Sandy and cinematography by Santhosh Rai Pathaje. 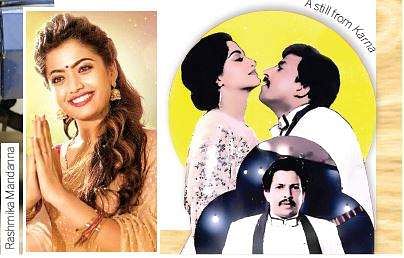 Now we are on Telegram too. Follow us for updates
TAGS
Chamak Rashmika Mandanna Ganesh Vishnuvardhan Sumalatha