Rakta Gulabi: A thriller made in a single take

Made without any cuts, this two-hour Kannada feature film, which will release on March 5, is an attempt to create a record of sorts

BENGALURU: Ask any filmmaker the process of making a film, and he’s sure to say it’s a lengthy process, with much blood and sweat going into it. Now, director Rabi Machinekad, whose film, Rakta Gulabi, is to release on March 5, took it upon himself to make a two-hour-and-eight-minute film without any cuts.

A thriller, which is a story of survival, Rakta Gulabi has been made in a single take, with Machinekad hoping to create a record of sorts with this feat. The brainchild of the director himself, Machinekad says that this has been made with a limited budget.  “It was no easy task to do this. I was very scared that someone might copy my idea. 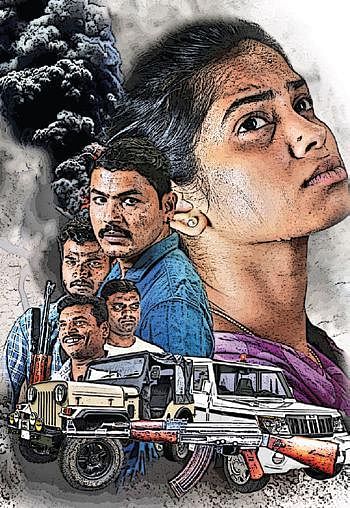 With a limited budget on hand, the single take and zero edit concept really worried me,” says the director about the film which has also been listed in the India book of Records and Asia Book of Records for its one take and zero edits. The entire movie was shot in Arehalli, Sakleshpur taluk and Hassan district with the director spending a lot of time on pre-production.

“I took almost one year to prepare for this movie and I kept it a secret that I was going to shoot a movie without any cut. None of the crew members or artistes had an inkling. I visited the location multiple times and did my own rehearsal,” he adds. The plot of the movie is centred around a person who leaves behind a rebellious system and proceeds towards a new life with his love who then struggles to pass the odds thrown against them.

The movie starts when he decides to leave everything behind just to live with her but his past haunts him. The question is whether he saves his love or whether he finds his dream life, says the director. Planning to shoot a film with a single take definitely left room for errors and challenges. From the rain playing spoilsport to technical glitches, the pre-production process proved to be a mountain of problems, according to Machinekad.

“When artistes made small mistakes, we had to reshoot the whole movie from the beginning. While moving to multiple locations, we had to re-setup the entire unit,” he says, adding that
action sequences, involving explosives and weapons, took nearly two months of preparation to ensure it was all shot at one go.

Now we are on Telegram too. Follow us for updates
TAGS
Rakta Gulabi Rabi Machinekad