Actress Parvathy has slammed Jude Anthany Joseph, a Malayalam director, for his cryptic response to the actress' comments on the misogynistic dialogues in the Mammootty starrer 'Kasaba'.

Actress Parvathy has slammed Jude Anthany Joseph, a Malayalam director, for his cryptic response to the actress' comments on the misogynistic dialogues in the Mammootty starrer 'Kasaba'.

Parvathy TK, the award-winning actress of films like 'Take Off', 'Mariyaan' and 'Bangalore Days' was recently cyber trolled for her reported criticism of actor Mammootty featuring in a misogynist scene from the movie 'Kasaba'.

Parvathy in a tweet, summed up a wholesome response to Jude by saying 'OMKV'. Obviously, she didn't captioned it 'For Jude', but isn't it evident?

Jude Anthany Joseph, a Malayalam director who is famous for his online brawls and a known face among the 'new-generation' cream of filmmakers had made a 'cryptic' Facebook post on the said debate.

"A monkey gets into a circus tent. It does tricks according to what the circus master says. Finally, the monkey becomes known all over the town as an acrobat. Then, it starts to abuse the circus performers and owners, cribbing that they were exploiting it. The monkey could have gone back to the forest in the beginning. But if it had done that, who would have heard about it?" 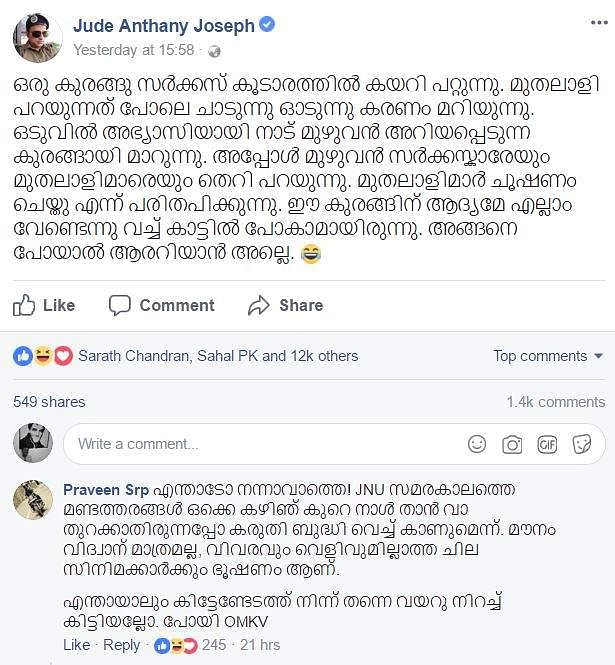 Let's take a look back at the issue.

Parvathy, on a panel at the International Film Festival of Kerala had criticised the way women were being represented on screen, by taking an example of 'Kasaba', the debut film of Nidhin Ranji Panikker.

The movie had Mammootty in the lead role, as Rajan Skaria, a misogynistic police officer who gets posted in a border town village.

In a cringe-worthy moment, the lead actor/character grabs a senior woman police officer by the belt as well as mouthing several misogyny laden dialogues throughout the movie.

Parvathy later clarified that she wasn't slamming actor Mammootty but was criticising the movie, well, that wasn't enough for Mammootty fans as well as for a section of the film industry itself.

On Monday, reacting to the controversy and supporting Parvathy, Finance Minister Thomas Isaac said that this (on the bullying) violence against women is condemnable. Recently, artists and activists like Deedi Damodaran, Rima Kallingal and Sajitha Madathil had to face severe trolling due to their stands. Isaac says that whether Parvathy's remark was right or wrong, the way it was received wasn't right.

"Intolerance is increasing in the cyber arena. The ones who make opinion not so favourable to some are being met severe abuses. Women are more subjected to this kind of abuses. There is a trend of selectively attacking those involved with the Women in Cinema Collective movement", writes Isaac.

The minister goes on to say that it is shame that there are moves to suppress female voices coming from a field where women face a lot of exploitation.