Art Director Amaran can't wait to catch the Dulquer Salmaan-starrer Solo on screen. It's among his most challenging works, he says. The film by Bejoy Nambiar is an anthology of four stories, with each being about one of four mythical elements: Earth (Rudra), Fire (Siva), Water (Shekhar) and Wind (Trilok). Given so many differences, the works of both Amaran and costume designer Gopika Gulwadi were cut out.

Gopika got a simple explanation from Bejoy when she met him for the first time. "He said the film is about four versions of Shiva, and how they're signified by the elements of nature," she says. "For each story, we froze on a unique colour palette to signify that element. Only after that did we come up with the character sketch."

Amaran, unlike Gopika, had known Bejoy for a while. "He called me from Ladakh at midnight and wanted to narrate a story. Once I realised it was an anthology, I told him to reveal each story to me only when we were ready to shoot it," he says. "I didn't want the 'hangover' from another story to ruin the continuity." Fortunately for Amaran, the four stories were shot in four different schedules. "It also helped that Bejoy always knows what he wants. There is very little wastage on the sets. That clarity is rare in a filmmaker."
When it came to the costumes too, Bejoy was clear about what he wanted. 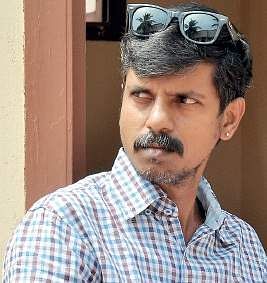 "Usually for contemporary films, we don't really worry too much about the fabrics but for Solo, it had to come through in every accessory," she says. Solo, according to her, is a rather unique film. This is a sentiment Amaran agrees with. "It's nothing like I've worked on so far. Most films have certain commercial aspects but Solo allowed even an art director to experiment," he says. "The film was shot by three cinematographers; so sometimes, it felt like we were doing four different films. I also found it interesting that the four stories all belong to different genres. The tones of the stories naturally differ and my challenge was to incorporate the mythical elements into each story."

Gopika explains how she tailored the costumes to each story: "The fabric can't be heavy when we're denoting wind. It had to be soft and flowy. For the girl, we've used chiffon and georgette. There are capes and dreamcatchers that flow with the wind too. For the men, we've used cotton and linen in a greyish blue tone to differentiate it from the water theme, that we've denoted with deeper shades of blue such as turquoise and peacock blue. We have incorporated this also into one sequence to denote Shiva and Parvathy, who are usually shown in shades of blue."

To denote the 'earth' story, Gopika resorted to earthy colours like military green, beige, brown and khakhi. "The army backdrop came in handy too," she smiles. "The boots and jacket add to the heaviness of the look. The fabrics are denser." What about for the 'fire' section? "We stuck to black, white and red schemes. Women are the protagonists of that section and they represent fire, so they wore red and its shades. We've even used a red bindhi in a completely black and white frame. The men denote the ashes; so we stuck to different shades of black and white to also denote good and evil. Amaran's work also helped maintain tonal consistency," she adds.

For the first time, Amaran has been credited as the production designer. "The job was for me to concentrate on the look and feel of the film. Broadly speaking, we have used four different colours for each of the stories. It was important that the colour schemes stay the same in each story, and yet, we couldn't make them look too similar. We couldn't afford to use contrasting colours. Even minor elements like curtains had to be sourced carefully."

He has stayed away from constructing sets.
"We have used some props, but predominantly, we have just tried to enhance whatever is available in the background. Wherever we shot, we discovered an element related to Shiva."

But enhancement of such detail wasn't easy. "In order to maintain a blue theme, we were out for days scouting for a Bluetooth device that would emit blue light," he says.

Now we are on Telegram too. Follow us for updates
TAGS
Solo Amaran Bejoy Nambiar