Lava Kusha, Kaattu and Crossroad to fight at BO

This week, three major releases will hit the marquee. While Biju Menon-starrer  Lava Kusha will hit the screens on Thursday, Asif Ali-starrer Kaattu will be released on Friday. Len

This week, three major releases will hit the marquee. While Biju Menon-starrer  Lava Kusha will hit the screens on Thursday, Asif Ali-starrer Kaattu will be released on Friday. Lenin Rajendran's portmanteau movie Crossroad will also reach the audience this week. Lava Kusha, an entertainer, is directed by Gireesh Mano. The movie also marks the debut scripting venture of Neeraj Madhav, who also plays an important character along with Aju Varghese. Touted to be a spy comedy, the movie is already in the news for the lean look Biju Menon sports in it. 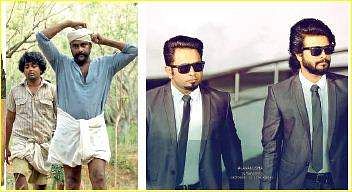 Meanwhile, Kaattu is said to be a rustic thriller, scripted by Ananthapadmanabhan.
A period movie, Kaattu will be set in the late 70ies. With Murali Gopy and Varalakshmi Sarathkumar playing significant characters, Kaattu is said to share a Padmarajan flavour.
Crossroad is an anthology of 10 women-oriented stories.