Director Ranjith Sankar says ever since Punyalan Agarbattis (2013) released, he had wanted to do a sequel to it. "I wrote a few scripts, but nothing satisfied me. So, I decided to shelve the plan and focus on a new venture. But, as the new script progressed, I thought it would be better to that place that story in Thrissur since the local slang helps when it comes to tackling a serious subject in the garb of a humour. Then, it occurred to me why not make it a sequel to Punyalan Agarbattis," says Ranjith about the comeback of Joy Thakkolkaran. The sequel, titled Punyalan Private Limited, will hit the screens in November. It has Jayasurya reprising the protagonist Joy Thakkolkaran. 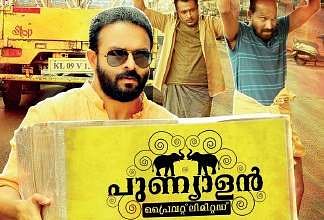 So, what does he find interesting in Joy Thakkolkaran? "Besides the fact that he is one of the popular characters, I felt that my story can effectively be told through him. It is better to use him than introduce a new one and establish him," says Ranjith.

Though Punyalan Private Limited will deal an entirely different story, there will be a thread of continuity.  "In fact, the whole process of making the sequel was in a reverse gear. We finalised the script first before deciding the character and other details. But, there is a continuity in the plot and the characters," he says.
How does he feel about Jayasurya's second version of Joy Thakkolkaran? "I think it is the audience who should rate him, rather than me. But, I personally believe he is a great actor," says Ranjith.

As the pre-release marketing tactics get under way, Ranjith says the response the teaser and song generated so far is great. "The animation song has already garnered a good response.  The song is connected to the plot and we had planned this while we were shooting the movie," says the director.   An entertainer, Punyalan Private Limited has Jayasurya's character playing an entrepreneur. While Joy sold agarbattis in the first movie, it will be packaged drinking water in the sequel.The movie also stars Sreejith Ravi, Aju
Varghese and Shruthi Ramachandran in the lead roles.