With Diwanjimoola Grand Prix, I felt joy of doing something new: Nyla Usha

Nyla was more involved in Diwanjimoola than any other movie she has done before.

She is just five films old but Nyla Usha seems to know her way around her trade. Namesake roles don't interest her and that explains the break. Now, back on screen for Anil Radhakrishna Menon's Diwanjimoola Grand Prix, Nyla explains her reasons for taking up the offer. "When director Anil spoke to me about the character, I felt this was something I can look forward to. I felt the joy of doing something new. I was waiting for a nice meaty role and this was it," she says.

And, it is with much passion that Nyla talks about Effy, her character. "Diwanjimoola has a distinct Thrissur flavour. It has an earthy feel to it and my character reflects that mood. Effy is the daughter of a famous bike rider in Diwanjimoola. She is raw,    someone who isn't bothered about her feminine side. She is all about working for her people and the colony she lives in. She is a total go-getter and I can relate to that. We share that common aspect," says Nyla. 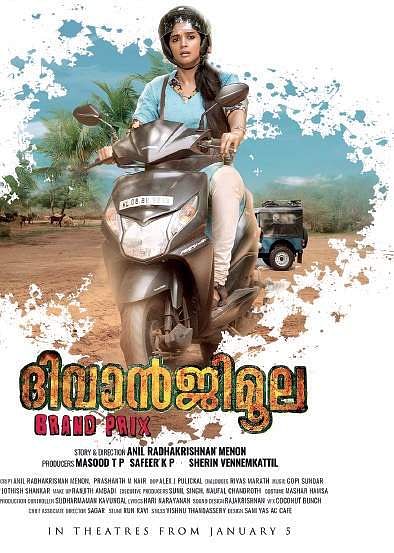 However, not without challenges. Talking in Thrissur dialect wasn't a cakewalk for her. "I had to sound like a native Thrissur girl as Effy is someone from a slum. To sound natural and not like mimicking is a bit of task," says Nyla. But, her trust in the team kept her going."With Anil Radhakrishna Menon, it is all smooth. The whole process of making the movie was spontaneous. One moment you wonder what's happening and next Anil proves that he has got it all embedded in his brains. This is why I chose Diwanjimoola Grand Prix. I believe in the director, the team he chooses and his quality as a filmmaker," she says.

Nyla was more involved in Diwanjimoola than any other movie she has done before. It was so much fun for her. "I knew what was happening inside and outside the cinema. Two months of working was an exhilarating experience. I could also enjoy Thrissur Pooram for the first time in my life," adds Nyla.
So, for someone who has had an unconventional entry to the cinema, how does she rate her journey. Nyla says she never was concerned about ups and downs. "I didn't come to the industry to build a career here. Even while doing Kunjananthante Kada, my debut, I was thinking of it as a one-time experience.

Still, I don't know whether the movies I chose were good ones or being selective hurt my career. But, then I am someone who goes with the flow. I don't want to keep myself too busy that I don't have time at home. Then, cinema is a serious business where a lot of people invest their time and money. Unless I am convinced about my part, I don't think people who watch me can be convinced," she adds.Expectedly, Nyla isn't worrying herself too much about the fate of Diwanjimoola Grand Prix too. "I am sure that when I watch this movie, I will feel happy because I have put so much effort into it," she winds up.

Now we are on Telegram too. Follow us for updates
TAGS
Nyla Usha Diwanjimoola Grand Prix