Still photographer Rajesh talks about his experiences in the films, Kandahar, Sakthi and Ratchagan

On the sets of 'Kandahar' (2010), at Ooty, director Major Ravi noticed that Amitabh Bachchan was taking several photos of butterflies on his personal camera. So, he drew stills photographer Rajesh aside and said, “Take candid photos of Amitabh as he goes about taking these pictures.”

So Rajesh hid from view and took shots of Amitabh taking photos during breaks in the shoot.
“At the end of the day, I had about 50 photos,” says Rajesh. “When I showed them on the laptop to Major Ravi, he said, 'Super'.” 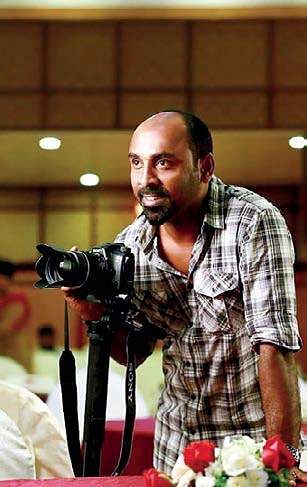 Then the duo went to Amitabh's trailer and showed him the photos. “Amitabh Sir got very excited and hugged me,” says Rajesh. “Then he told me, 'I did not know that I had so many facial expressions'.”
Amitabh requested for the photos. Rajesh saved it on a USB drive and gave it to the superstar. “Then he told me that since he would be there for the next ten days, I should take more shots,” says Rajesh. So, he proceeded to do so on his Canon Mark 11. And so, at the end of Amitabh's shooting stint, Rajesh once again presented another USB. “Amitabh was very happy,” he says. “I was so grateful I could interact with such a big star.”

But not all interactions on the set are so pleasant. In KT Kunjumon's Tamil film, Sakthi (1997) the shooting took place at Pollachi. In it, a few wild elephants were making a charge. To shoot the scene, the cinematographer Tirru, along with his assistant, was placed on a crane 45 feet high. Beside him was Rajesh who wanted to take aerial shots. But things went wrong soon after. “Somehow, the mahouts lost control of the elephants and it came charging towards the crane,” says Rajesh. “We knew that if they hit the crane, we would fall to our deaths.”

But somehow, the mahouts and crew members retained their presence of mind. They burst firecrackers and distracted the elephants. The mammals stopped in their tracks and turned around. Thereafter, the mahouts were able to bring the elephants under control. “Watching from the top, I felt grateful to God for saving us,” says Rajesh.

There was another close shave during the shoot of Kunjumon's Tamil film, Ratchagan (1997). The climax took place on the Chengalpet highway, 70 kms from Chennai. Nagarjuna was the hero, while this was Bollywood star Sushmita Sen's first Tamil film. In the climax, Nagarjuna, on a bike, was chasing a truck which was driven by Sushmita. Up above, in a helicopter, a villain took out a machine gun and shot at Nagarjuna. There was another helicopter above the first. “Inside it, there was cameraman Ajayan Vincent, an actor, and myself,” says Rajesh.

Both the helicopters had to keep a careful distance between each other, but somehow, the calculation went wrong, and they came much too close. “Realising the error, our pilot suddenly zoomed up and
managed to avoid a collision at the last minute,” says Rajesh. “It seemed to me as if I got my life back.”
And this life in Mollywood began in the most casual way. In 1991, the Thrissur-born Rajesh had gone to Chennai to work in a friend's photo studio at KK Nagar. Just next to the studio there was a vegetarian restaurant.

It was there that he met legendary director Bharathan's assistant by the name of Sasi Menon. When Rajesh expressed his desire to join films, Sasi invited him to meet Bharathan, who lived nearby.
So, he went there and was asked to take photos of Shamili the baby girl who played the five-year-old heroine in the film 'Maloothi', which Bharathan was directing at that time. Rajesh did so and when Bharathan saw the pics, he told Sasi, “These shots are very good.” Then Sasi said, “Rajesh has a desire to enter films. If he can become an assistant to somebody that would be great.”

Immediately, Bharathan picked up the phone and spoke to the leading stills photographer in Chennai, Soni Sreekumar, who had worked in more than 500 films. Bharathan said, “Soni, there is a young man from Kerala. He is a good photographer. Can you take him as your assistant?” So, Soni appointed Rajesh as an assistant. However, within a year, Rajesh became independent. Today he has worked in 75 films including 30 by noted director Joshy. “I will never forget the kindness shown by Bharathan Sir , as well as the opportunities given by Joshy Sir,” he says.