Seventy five days. 35 releases. Just one super hit. If that doesn’t tell the story of poor planning and haphazard filmmaking in Mollywood, perhaps nothing ever will, feel industry experts.

KOCHI: Seventy-five days. 35 releases. Just one super hit. If that doesn’t tell the story of poor planning and haphazard filmmaking in Mollywood, perhaps nothing ever will, feel industry experts. While the first two-and-half months of the year have registered a combined loss of Rs 75 crore, curiously, 20 more films are lined up for release over the next three weeks. Of greater concern within the industry is whether such a stream of new releases, an overkill even, would not eventually lead to a loss of patronage.

“The Mollywood box office is going through a slump in the first quarter of 2018. As of March 16, there were 35 releases. Of this, three movies would have been profitable for their makers. Jeethu Joseph’s Aadhi has done a good business. Aadu 2, which was released in late December 2017 was the only blockbuster in the last five months,” said Kerala Film Distributors Association head Siyad Koker. 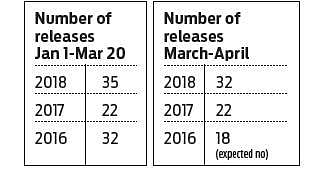 According to industry experts, apart from Aadhi, Captain and Queen are two other Malayalam movies which received a positive response from the audience. “However, still there are three or more releases every week. Too many films are releasing resulting in none of them reaping benefits at the box office. The producers want at least 100 stations for even small movies. This has resulted in “show break” at many theatres, which was something unusual in Malayalam cinema,” said Kerala Film Producers Association president G Suresh Kumar.

Asked about the term ‘show break’, Suresh Kumar said most of the theatres are forced to break the shows as there will not be even 10 people to watch the movie. “At least they should have a minimum of 15 people to watch the movie. Otherwise, how will they manage the operational cost?” he asks.The producers’ association the other day cleared 26 projects.“Among those 26 projects, we noticed only three or four projects with prominent actors and crew. All the others feature lesser known actors or newcomers,” added Suresh Kumar.

Now we are on Telegram too. Follow us for updates
TAGS
captain Mollywood queen Aadhi