The Sudani from Nigeria filmmaker talks about his new film, working with his actors, and the politics in his films

Zakariya is something of a norm breaker. Two years ago, he had swooped in and stolen the hearts of Malayali audiences with his directorial debut Sudani from Nigeria, a movie that indiscriminately tugged at the heartstrings of critics and moviegoers alike. The ‘little’ film went on to pick up awards aplenty, a feat especially commendable considering his choice to cast lesser-known faces in lead roles (except for the impeccable Soubin Shahir, of course).

Hence, it comes as no surprise that ever since its announcement, his next Halal Love Story has been riding a wave of anticipation. In fact, after Indrajith Sukumaran unveiled the first look poster of the movie featuring Grace Antony and himself a few days ago, the excitement among Malayali cinephiles and general audiences alike is at a fever pitch. The makers had also released yet another poster that featured actors Soubin Shahir, Joju George, and Sharafudheen.

On the sidelines of the Shades-e-Indore short film screening event held at Kochi on Sunday, Zakariya spoke exclusively to Express about Halal Love Story and more. “If it has to be put into a genre, Halal Love Story can be called a family comedy-drama,” Zakariya says. “But there is also a ‘movie within a movie’ theme that is central to it.” He is still not at liberty to dive into the details, given that the film is still in its post-production stage. But he is definitely proud, that he can say —especially after a comment made by Indrajith once the shoot had wrapped. In a Facebook post, the actor had said: “Always loved portraying humour on screen, and this one (his role as Shereef in Halal Love Story) is probably gonna be the most layered character among that lot!” 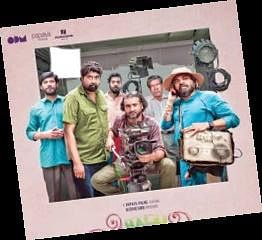 “Whether it be Indrajith, Joju, Sharafudheen or Grace, all of them are actors that can be trusted with a vision. It is guaranteed that they will deliver what we need, or maybe even more. They were also ready to overlook any inconvenience that they may have had to face during the shoot, and instead dedicate themselves to the characters completely. And especially because of all this, it was truly a moment of pride for us when he put up that Facebook post. Even when we were shooting, they kept reiterating how much in love with the characters they were, and it was wonderful to hear.”

Compared to Sudani, more seasoned actors are headlining ‘Halal’. “The primary reason is, of course, the differences in the budget. When a film is being made at a certain cost, there is also a responsibility that comes along with it. That had certainly been one of the factors for roping in more ‘known’ actors. But the movie still features a lot of newcomers.”

Zakariya has also penned the script for Halal Love Story with writer-director Muhsin Parari, who co-wrote Sudani from Nigeria. Does he believe that for a filmmaker to truly bring alive a vision, they have to be involved in the writing process? “Definitely not,” Zakariya says. “Sometimes a story is so deeply entrenched in you, that you want to bring it to words.

That is why for both Sudani and Halal, Muhsin and I decided to write the script together. At the same time, there are also cases in which we listen to a story and end up instantly connecting with it, even if you have not written it. In fact, my next project is like that. I am not writing for it.”

While speaking about the politics of Malayalam films in general, Muhsin Parari had pointed towards an often-subconscious effort to not be ‘too Muslim’ while making a movie, so that it is digestible for the average Malayali audience. He had said that while this tendency to “compromise” had manifested many a time while shooting Sudani—in small forms like avoiding shooting in a mosque, there have been efforts to counter the same in Halal. And Zakariya agrees with him completely.

“There are always these template feedbacks that loom over our heads. Especially when it comes to religion, there is the frequent allegation that we are trying to project a certain idea or principle. So, to avoid such controversy, we sometimes end up indulging in a kind of self-censorship. But Halal Love Story is different. It is an unapologetically made film, primarily since the story and the context in which it has been set up demands such an approach.”

Recently, Zakariya had also spread his wings into acting, effortlessly handling the role of the first patient infected by Nipah in Aashiq Abu’s intriguing medical thriller ‘Virus’. Will we see more of him? “Acting is definitely a field I am interested in. I have done theatre plays now and then. But it’s also about the opportunity,” he says. “People are not going to be offering me roles just because I’m a director.”

While that is exciting, cinema lovers will have even more to look forward to soon. Zakariya may soon be seen joining hands with actor Fahadh Faasil in a new project, which is still in the pipeline. Halal Love Story is expected to be a Vishu release.

When a film is being made at a certain cost, there is also a responsibility that comes along with it—Zakariya, director

Stay up to date on all the latest Entertainment Malayalam news with The New Indian Express App. Download now
(Get the news that matters from New Indian Express on WhatsApp. Click this link and hit 'Click to Subscribe'. Follow the instructions after that.)
TAGS
Halal Love Story Zakariya