Kerala State Film Awards go out of the box office

Ever since the Kerala State Film Awards were instituted more than 50 years ago, there have been very few editions where the jury’s choice of winners did not court controversy.

KOCHI: Ever since the Kerala State Film Awards were instituted more than 50 years ago, there have been very few editions where the jury’s choice of winners did not court controversy. This year, though, it was like a breath of fresh air as the judging committee’s decisions were widely welcomed by the industry and the public.

What is most heartening is a discernible change in the manner in which the jury went about its task in choosing the winners, especially the award for the Best Actor which had in the past often set off a torrent of criticism. 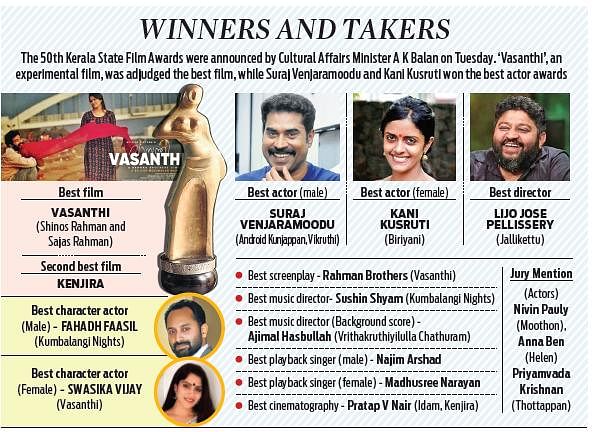 Cultural Affairs Minister AK Balan, who announced the state film awards on Tuesday, said lately, there has been a clear shift in the manner in which the Best Actor awardees are chosen. "The list includes Indrans, Vinayakan, Soubin and Suraj. This is a good sign that the award jury is considering serious acting efforts rather than going behind popularity and stardom," he said. Between 2010 and 2015, the Best Actor awards went to Salim Kumar, Dileep, Prithviraj, Fahadh Faasil, Lal, Nivin Pauly, Sudev Nair and Dulquer Salmaan.

"But we cannot call it as a visible change or a paradigm shift from the era of stardom to 'unconventional' heroes. Post-2015, a lot of experimental movies were made in Malayalam. A lot of independent movies are also coming up. Usually, such movies cannot afford the luxury of casting superstars. The superstars as well as others who play 'unconventional' roles by breaking the stereotypes are also excellent actors. Hence, they are being rewarded," said film critic CS Venkateswaran.

Film critic CS Venkateswaran said the award selection will also reflect the opinions and ideology of the jury. "Naturally, a Left government may not opt to include a person with a strong right-wing outlook in the film awards jury," he said.

According to him, just for the sake of encouraging progressive cinema or political correctness, no jury should purposely go in for a balancing act. "In the past, we have seen a balancing act during announcement of awards. If that practice is not being followed in the last five years, that itself is a good sign," he said.

Now we are on Telegram too. Follow us for updates
TAGS
Kerala State Film Awards