The film is unique in that the main character, Ismu, is played by an actor with Down Syndrome named Gopikrishna

George Kora, who co-wrote the Nivin Pauly-starrer Njandukalude Naattil Oridavela, is making his directorial debut with a light-hearted drama titled Thirike. The film is said to be a moving tale of a bond between two orphaned brothers, Ismu/Sebu and Thoma. George has co-directed it with Sam Xavier.

Thirike is a unique tale in that the main character, Ismu, is played by an actor with Down Syndrome named Gopikrishna Varma, while George himself plays Thoma. The makers have released a video introducing Gopi, who got cast after his Tik Tok videos caught their attention. 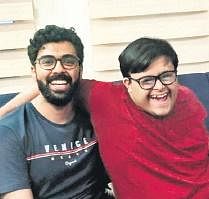 Sharing the video, George said, “For as long as I can remember I’ve specifically dreamt over and over again in a million different permutations and combinations of what my first film introduction as an actor would be. Me, the hero! Ente thala! Ente full figure! Romance. Comedy. Action. Dance. Pinnalla! And then last year, I found Gopi. Instantly, I knew my dream could wait.

For, I’d found one more deserving. I don’t know yet if he is ever going to have another film. But this one is his.” As per the makers, Thirike revolves around the separation of the brothers during childhood and the efforts by the younger brother, Thoma, to track Ismu after they have grown up.

Shanti Krishna plays a significant character in the film, as Fathima, the woman who adopted Ismu. Gopan Mangat and Sarasa Balussery also appear in supporting roles. George has previously scripted, directed and starred in the short film Last Day of Summer, which was the opening short film for competition at International Documentary & Shortfilmfestival of Kerala.

Now we are on Telegram too. Follow us for updates
TAGS
George Kora Njandukalude Naattil Oridavela