The trailer promises a gripping, atmospheric thriller that revolves around three characters and puzzling murders.

One of Fahadh Faasil's most anticipated films, Irul, will be releasing on Netflix on April 2. The streaming giant released the trailer on yesterday. As expected, the footage promises a gripping, atmospheric thriller that revolves around, supposedly, a novelist (Soubin Shahir) who wrote a book about serial murders and two mysterious characters played by Fahadh and Darshana Rajendran. 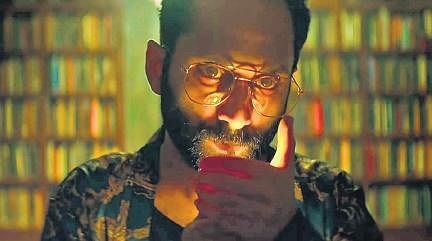 Fahadh, Soubin and Darshana, who are the only actors in Irul, have been dropping some riddles on their social media pages in the last couple of days to promote the film. While sharing the trailer, Fahadh captioned it, "There's a killer on the loose. Do you want to know his story?" Darshana captioned it, "What do you do when you're locked in with a murderer and there's no telling who he is?" and Soubin wrote, "Bhayanakamaya ee kadhayude pinnil mattoru kadhayundu (Behind this scary tale is another one).

Anto Joseph, who is co-producing the film with Plan J Studios, captioned it, "Nowhere to run, nowhere to hide. The only way out is to get to him before he gets to you." The official synopsis reads:  “A dark rainy night, an empty house, a stranded couple and an unknown man.

A sleek game of the cat and the mouse starts playing on, as the three of them find a dead body in the basement. The movie takes the shape of an old-fashioned whodunit — the kind with mystery, suspense and a house that feels like a mousetrap. Leaving us questioning, who is the killer?”Directed by debutant Naseef Yusuf Izuddin, Irul was shot by Jomon T John, and edited by Shameer Muhammed.

Now we are on Telegram too. Follow us for updates
TAGS
Fahadh Faasil Netflix