Rapper Aditi Nair, one of the youngest artists from the state to perform in the big leagues is now venturing into playback singing

Thiruvananthapuram-based Aditi Nair R aka ‘Rap Kid’ is just sixteen, but she has already made a mark of her own in the South Indian music industry. Her recent set for the digital hip-hop music festival by Kochi Music Foundation that came out in January made quite the commotion among hip-hop fans. The young artist stepped into playback singing with the Malayalam movie ‘ Kilometers and Kilometers’. She has now penned the lyrics and sang five songs for the upcoming Malayalam sports drama ‘ Kho Kho’ written and directed by Rahul Riji Nair.

The songs from the Rajisha Vijayan-starrer were recently released on various music platforms and have garnered interest among listeners. “I began writing and composing songs when I was six years old. Writing lyrics and compose more movies has been a long-pending dream,” shares Aditi, who is one of the youngest lyricists in the industry. She says, “Sidhartha Pradeep, the music director of the film approached me after seeing the compositions I upload on my page. He asked if I was interested in doing songs for an upcoming Malayalam film. I readily agreed as it was a dream come true.”

The very next day, director Rahul Riji Nair called her for recording. The lyrics weren’t ready. “The initial plan was to compose one song. But we went on to compose five. For the sixth song, ‘Kho Kho Theevandi’, I was singing backing vocalis for Souparnika Rajagopal and Aparna Sathyan,” she remembers. 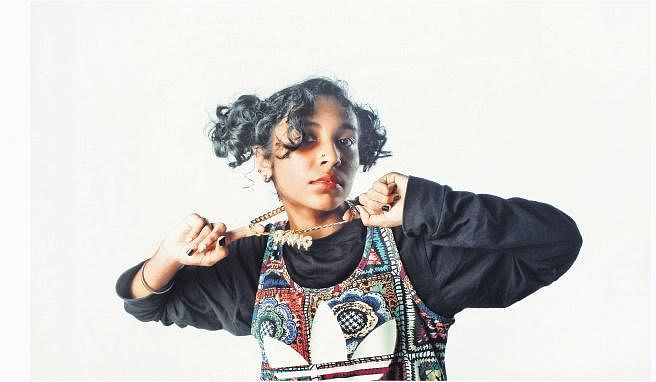 The theme song titled ‘ Rise’ is a highly energetic track that is garnering huge praise. The other tracks include ‘Smack with the Kho’, ‘Boom Boom Bam’, ‘Did she catch me’ and ‘Betterness’. Aditi says, “The songs are both in Malayalam and English. This makes them stand.”

Highlighting the theme of the film, Aditi says, “The film revolves around Kho Kho, a game which is played locally in the country. But it has never been given the spotlight that other games like Cricket have been getting.” Aditi is a student of Kendriya Vidyalaya AFS, Akkulam. She looks forward to doing more projects for movies.

Now we are on Telegram too. Follow us for updates
TAGS
Aditi Nair Rap kid