When confronted with films like Sathura Adi 3500, you can’t but wonder what people did, before the advent of mobile phones, to cope with such films.

When confronted with films like Sathura Adi 3500, you can’t but wonder what people did, before the advent of mobile phones, to cope with such films. Did they stare vacantly at the screen, reflecting on their life choices? Did they count the number of seats in the theatre? Did they maybe try to guess the name of each audience member? Or perhaps, there’s time to do all of these. 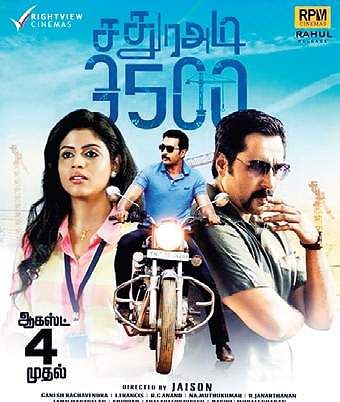 Sathura Adi 3500 is plagued by all the issues that usually afflict its kind. The lip-syncing is horrific. The heroine, in one scene, almost seems to be chewing gum, as the dialogues play on. The acting is wooden. Some of the actors, including the hero, Nikhil Mohan, seem quite ill at ease reacting to the lines of other characters. The characters also talk in loud asides. When scared by a supernatural presence, one character loudly says, “Yaarayum kaanum.

Yaara irukkum?” Thank you for stating the obvious. It’s quite interesting then that such a film has plenty of talented actors in its roster, including Kovai Sarala, MS Bhaskar and Thalaivasal Vijay, who all seem quite unsure of what they are doing on the sets of this film. Actor Rahman is heavily featured in the promotional material, but he disappears early on never to return again. I wish I could say the same about myself.

It’s a horror film, but you probably knew that already, as they don’t make any other kind of films anymore. So, a substantial part of the runtime is devoted to the scares. The ghost pops out of nowhere, and quickly disappears. But the way those scenes are pictured, if you saw the ghost, you’d react with mild boredom, and ask if it didn’t have better things to do.

A girl gets possessed, and in her most menacing voice, says, “Ulagathla periya adhisayam Eiffel Tower. Adhai vida en plan uyarndhadhu.” Let’s just say the audience members sitting in front of me were lucky that I was not sipping on coffee.

A line or two later, the seemingly possessed girl looks at her dad and says, “Inga vaada vennai.” You’re almost tempted to think it’s probably meant as a joke, but the music remains ominous. Take your children to the film if you want to. There’s nothing scary about this horror film. You may well use the film as corrective punishment.

On occasion, the film turns bizarre, even given how strange it generally is. A man wakes up alive during his post-mortem. And the director never truly explains why or how. A doctor issues a death certificate to a man who’s alive because “he begged me for it.” Please, could I get some of whatever the writers were smoking? But the action scenes towards the end really take the cake.

It’s a gun fight, but for whatever reason, every character with a gun keeps diving towards the camera when shooting. The enemy could be right in front of them, but they’d still dive and shoot anyway. It’s what the action scenes in Matrix would look like in the darkest nightmares of the Wachowskis. Walking out of the theatre, I noticed every audience member carefully avoiding eye contact with everyone else. This is not the sort of film you wanted to be spotted watching.

Now we are on Telegram too. Follow us for updates
TAGS
Sathura Adi 3500

'In The Name of God' review: Irrepairable ending undoes a promising start

'Jagame Thandiram' review: Too frivolous to be serious, too serious to be fun