Like when a boy, who is convinced he is god, learns that his teacher has cast someone else to play Lord Krishna.

My first exposure to the idea of virgin birth was being told about how Kunti got pregnant with Karna (which finds a mention in Oru Pakka Kathai). So eager were most of us, as children learning about magical worlds and the origin stories of heroes — gods, so to speak — that it never occurred to think about Kunti, and how her family and society would respond to her unexpected pregnancy. It turns out that there’s a fantastic modern interpretation in there somewhere, an idea that is the genesis of Balaji Tharaneetharan’s Oru Pakka Kathai.

The film is wonderfully unpredictable for the most part, and I enjoyed that Balaji desists from going the usual sentimental route in handling the uncomfortable topic of an unmarried middleclass girl finding that she’s pregnant. Balaji also shows a great taste for humour, especially in some unlikely places. Like when Saravanan (Kalidas Jayaram) meets Meera’s parents for the first time. Like when a boy, who is convinced he is god, learns that his teacher has cast someone else to play Lord Krishna. 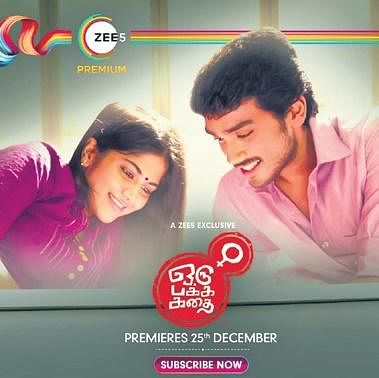 The writing beautifully manages to milk humour from awkward, uncomfortable, and sometimes, unpleasant situations. In another film, Meera’s parents would react to her pregnancy with noisy uproar, but Balaji is a sensitive writer and filmmaker who is able to communicate a lot more with quiet glances, angry stares. I enjoyed that for the longest time, I was not sure what this film’s take on this ‘miracle’ is. Govind Vasantha’s atmospheric score plays its part to keep you guessing. It’s a film in which I would have bought any development. A small boy could turn out to be a Vishnu avatar, a woman could turn out to be the mother of a goddess, a little girl (Darshini) could get on a horse and slaughter evil people…

None of this comes true in this film, but the almost mystical vibe of Oru Pakka Kathai means that it could so easily even have become a realistic take on the origins story of a deity. There’s an indication right from the get-go that the complexity at play in our world isn’t always in our intellectual grasp. And yet, it maintains the beautiful balance of being practical about the conflicts — and it helps that its characters are largely decent people, like Meera’s parents who put her safety above their own unhappiness that she is pregnant.

This sensitivity is accorded to Saravanan’s character as well, and Kalidas Jayaram’s likeability sells it even better. The actor shows a talent for humour as well; that scene that has him look all helpless and confused while Meera’s angry parents bear down on him, is a riot. If I had a complaint at all about the characterisation, it would be that we could have learned about Meera’s predicament a bit more. What must it be like for such a girl to be forced into a pregnancy? Her name might have been cleared of ‘wrongdoing’, but what must it be like for her to be at the centre of a media circus? How did she make peace with putting her dreams and aspirations in the backseat and take on the burden of motherhood?

Does she ever give abortion a serious thought (though at least one regressive doctor makes sentimental arguments against it)? With virgin birth in the picture, how far can religion — and its cult — be? It’s in turning this familial drama into a social commentary that Oru Pakka Kathai loses colour. There’s an abduction, an accident, a life at risk, a message… There’s the late introduction of a narrator to clarify a thing or two as well, and none of this feels half as graceful as the film does for the longest time. The slow reaction shots lose their novelty after a while, as well. This sudden transition — and the loss of its mystical vibe — feels choppy, even if I agree with the criticism of superstitions.

For a film with timelapse shots of the sky, the vision of a boy, a successful prognostication... it turns too practical, too impersonal, for its own good. Nevertheless, its tepid end notwithstanding, I’ll remember Oru Pakka Kathai for its unique premise, humour… and sensitivity. Take that scene that has Saravanan meeting Meera’s father, who has just realised the folly of his quick conclusions about the former. The scene is all ripe for an apology.

There is a pause instead as Meera’s father grapples with his response and finally, he finds the right word for his feelings: “Thanks…” It’s a beautiful moment, one of many in this film that goes in an unexpected direction towards its latter stages. But it’s an achievement nevertheless that well after being shelved for half a decade, the film’s timeless topic — and the consequent commentary on society and religion — is quite relevant even today… and quite frightening too, given that strangers are shown to lay claim to an unrelated baby under the name of religion. The boy who thinks he’s god, is shown to be on the lookout for a Satan to take down. Balaji Tharaneetharan’s Oru Pakka Kathai presents us with one.

Now we are on Telegram too. Follow us for updates
TAGS
Oru Pakka Kathai Balaji Tharaneetharan Kalidas Jayaram