The film, in a bid to underline her dilemma, introduces an absent father complex — a trope so worn it almost beats the generic soundtrack.

Arranged marriages are a busy affair in India. Often, they involve a degree of espionage. Even before Ginny (Yami Gautam) and Sunny (Vikrant Massey) have met, their parents are swapping notes and plotting to set them up. Such broad breach of privacy should ideally annoy most children. Sunny, though, is delighted. He regards himself out of Ginny’s league, and thus will need all the help he can get.

Debutant Puneet Khanna’s film takes the ‘parents-play-cupid’ setup and stretches itself thin over two hours. Ginny’s mother (Ayesha Raza Mishra) runs a matrimonial service but struggles to pack off her own daughter. Flustered, she assists Sunny — who needs to get married to secure his own restaurant — in winning her over. Ginny, meanwhile, is hung up on her ex-boyfriend and can’t seem to make up her mind. That’s not all. The film, in a bid to underline her dilemma, introduces an absent father complex — a trope so worn it almost beats the generic soundtrack. 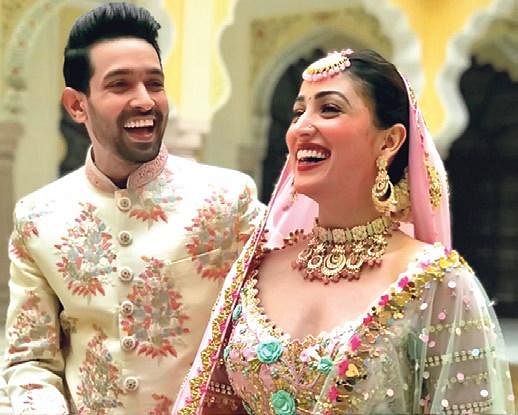 The opening hour is a buffet of Delhi sights and sounds. At a wedding, Sunny’s dad sidles away to ‘wet his whistle’. Sunny doesn’t go, lovestruck by Ginny and breaking into an impromptu Bhangra number. After following her around half the city and all but blowing his chances, he joins her on a trip to Mussoorie. This is the only watchable stretch in the film — the old-fashioned ‘Rubaru’ cutting through otherwise stock scenes.

Ginny desires love but is confused about marriage. Sunny favours marriage but is puzzled over love. Writers Navjot Gulati and Sumit Arora can’t tell love from marriage. Indeed, as the film reveals its emotional coordinates (it’s in the title!), the rest of the journey begins to feel like a drag. It’s a cardinal sin for any romantic comedy to become too obvious — a fact that seems to escape the best of writers. The haphazard conflicts — Sunny agreeing to marry someone else, a third suitor turning up at Ginny’s door — further reveal this gap.

Vikrant pulls his best Diljit Dosanjh impressions as a swooning Delhi lad. There’s a scene where Sunny, soft, faltering and fond of his kitchen tools, bursts out angrily in his shop. The moment is meant to suggest his repressed masculinity, but Vikrant, one of the gentlest male leads around, also makes him vulnerable. Yami has the opposite task — indicating tenderness while remaining closed-off — and fairs well. Her presence, however, automatically recalls Vicky Donor (2012), the film that set the template for the Delhi romcom. Ginny Weds Sunny, while drawing on the lingo and the quirk, adds precious little to the genre.

Now we are on Telegram too. Follow us for updates
TAGS
Ginny weds Sunny Yami Gautam (Vikrant Massey

'Outside The Wire' film review: High on action, low on substance

'Super Over' review: Few impressive shots, too many dot balls

'Tribhanga' movie review: A poignant tale of mother and daughters