The man behind Unmayae Un Vilai Enna, Gowravam  and more, R Neelakantan, fondly known as Neelu, turned 80 this year! CE catches up with the star

Down-to-earth, modest, easy-going and full of life, are some of the few words we have to use to describe R Neelakantan fondly known as Neelu. Never failing to make the audience laugh with his subtle humour, peculiar dialogue modulation and body language, this theatre artist-cum-actor has had an extraordinary journey and says that he’s happy and content with his achievements today. Whether it’s delivering dialogues in a typical Madras Bashai or playing the role of a sophisticated-yet-funny lawyer, he has done it all. Who can forget his role as the confused policeman who struggles to get the main characters married in the 2002 movie, Pammal K Sambandham?

The versatile artist turned 80 this year, but this is what he has to say, “I love acting and age is just a number!” With 160 films and 7,000 stage plays to his credit, Neelu is one of the few thespians who can bring a wide smile on our faces. His life started in Manjari, a small village in Malabar, Kerala, and took a turn after he moved to Madras. His father worked in the Postal Department, assisting the Post Master General.

“I travelled a lot as a child, which added to my experiences. Since my father was in the postal department, I visited many places and then I reached my final destination — Madras. I had two elder brothers and sisters. I enjoyed all the privileges as the youngest in the family,” he recalls.

Neelu, whose name is now synonymous with stage plays, theatre, drama and acting, struggles to explain how he got into the field. “I don’t know how to explain it. It just happened! No one can teach you how to act. There were no schools for acting like today and people who excelled in acting had the natural talent. I was one of them…what else can I say?” smiles the octogenarian.

A regular at school shows and fancy dress competitions, acting took shape when Neelu became part of the boy scouts movement. “The scouts used to be fun and we were split into groups during the last day at the bonfire. We were given the task of coming up with a skit and performing it in 10 minutes. I performed along with my friend and received thunderous applause. It was such a boost,” recalls the thespian known for plays like Sambavami Yuge and Mohamad Bin Tuglaq.

While studying in Vivekananda College, he met Ambi, Cho Ramaswamy’s brother and the duo along with Naarayanaswamy, participated in competitions and won prizes. “We formed the Young Men Fine Arts Club, which then was named as Viveka Fine Arts. We have also won trophies both in Presidency College and College of Engineering,” he reminisces. Cho was his senior in college, their friendship developed over time. Cho started writing plays for the troupe and gradually became part of the Viveka Fine Arts Club. “Slowly we were being recognised by Sabhas and great writers like Koothabiran also wrote plays for us.”

After acting in several plays like Unmayae Un Vilai Enna, Yarukkum Vetkamillai, Quo Vadis and Endru Thaniyum Indha Sudandira Dhaagam, Neelu ventured into the cine world. But, coming from a middle-class family, Neelu says like most people, he was hesitant to take risks and take it up as a full-time career. “I didn’t get a job immediately after I graduated. By then my father and brothers were earning and I didn’t have the pressure as I was the youngest. I started working in 1960 and worked with the same company for 40 years. In fact, my work place and my family complimented my acting choice and they never raised objections,” he explains. 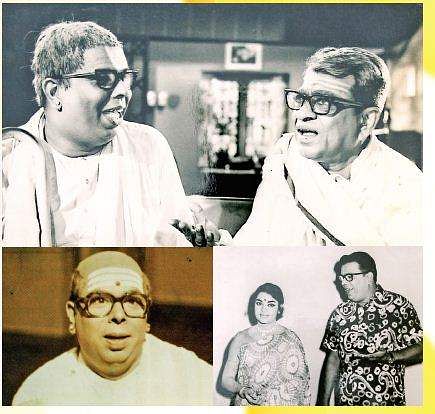 He landed his first movie in 1966 through Aayiram Poi directed by Mukta Srinivasan, and went on to act in 160 films including Nootruku Nooru (1971), Gowravam (1973), Avvai Shanmugi (1996), Anniyan (2005), Kalyana Samayal Sandham (2013), and Trisha Illana Nayanthara (2015). “I wasn’t nervous about acting in front of the camera. I’m happy that I was respected by everyone in the industry. Be it the directors or the actors, everyone respected me...and it continues even today,” he smiles.

He has acted in plays along with Crazy Mohan, Cho Ramaswamy, Kathadi Ramamurthy, and other veterans and became a sensation when he was a part of the TV serial, Enge Bramanan. “The show garnered rave reviews and people would come up to me and praise me, even when I’d travel abroad!”

If you thought Neelu couldn’t venture into more mediums, the 80-year-old excitedly talks about his YouTube show Talku Backu with Bosskey and shares that he is happy to be in the loop, updated with the current trends. “I am a very happy-go-lucky person. I take things lightly and don’t get angry… I’m open to anything new and that makes me content with my life,” he says.

Recently, writer Shanker Venkataraman published a book about him, titled Nadakame Ulagam, and Neelu cannot stop gushing about it. “The book is like a capsule of my life and I loved discussing it with the author,” he says.

Neelu has consciously taken a break from films. “My wife objects me from acting as she’s concerned about my health. I’ll always want to act. After all, acting and theatre are my first love,” he smiles.

Love for Sivaji Ganesan
I was in office and director Muktha Srinivasan called me to play a role in the 1982 Sivaji starrer Paritchaiku Neramachu. Since I have always made sure that my work commitments aren’t disturbed due to films or theatre, I make it clear that I will have to be in office by 11:30 am for a meeting. He agreed and the next day I went for the shoot at about 6 am. I was shocked to see Sivaji there with his make up on. The outdoor unit and the camera men had not assembled. I realised that Muktha had informed him about my time constraints and I was taken aback by his dedication and respect for his costars. Finally the shoot started by 9 am and Sivaji made it a point that my close-up shot portions were shot first so that I can reach office on time. Such a respectable human being!