Are Dhanush and Simbu frenemies? 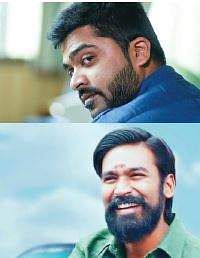 It’s well-known that both Simbu and Dhanush didn’t share good rapport earlier, but now they’re good friends. A couple of their movies have clashed earlier at the box-office. STR’s Kovil (2003) and Pudhukottaiyilirundhu Saravanan (2004), released around the same time. Again, it was similar for Manmadhan (2004) and Dreams (2004). One more instance was Maari (2015) and Vaalu (2015). Simbu’s Achcham Yenbadhu Madamaiyada is running to packed theatres especially in multiplexes. He had wrote on Twitter, “Disastrous flop movies are mentioning as blockbusters, what would u call AYM? Better to say we are happy than mentioning verdict.” If you have been wondering why suddenly STR has come up with such tweet, many feel that it could have aimed at Dhanush’s pinned tweet, which says, “Kodiblockbuster25thday. Thank you all for making kodi a Blockbuster. Will always be grateful.” So, we genuinely do not know if those two were mere coincidences, or STR targeted Dhanush, in particular.