'Movies may come and go, art will always be there for me'

Artist and yesteryear actor Marthandam of Chinna Thambi fame talks about his tryst with stardom, his love for painting movie posters and the age of digitisation.

I f you are an ardent Tamil film buff, there is no way you would have missed watching the 1991 blockbuster Chinna Thambi. Remember the actor whose character was mentally ill, constantly mouthing the dialogue — “Enaku kalyanam”? Marthandam, also known as 'Chinna Thambi' Marthandam, may have become famous due to his performance in the film, but the man is primarily an artist now. Manning his art stall at Sankara Hall, Marthandam is all smiles about his work. 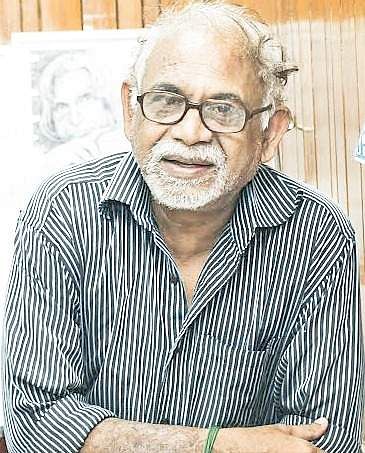 Born in a village in Thirunelveli, Marthandam was born into a family of farmers. With no background in art, Marthandam says that seeing his father’s parrot figures from palm inspired him to take up art. “After completing Class 10, along with my parents’ encouragement and support, I enrolled in an art class at Nagercoil. It was called Chitra Drawing School,” he recalls. Getting his first formal training in arts at this small art centre, Marthandam reveals that he learnt multiple techniques.

“I travelled to Mumbai to learn more from artist C Mohan, who used to draw paintings with knife. Later, when I came back to Chennai, I started drawing posters for films,” he says.

It was while drawing a poster for Mazhalai Pattalam (1980) that Marthandam discovered his interest in acting. “Eventually after spending time drawing posters for films, I bagged a role in Balachander sir’s movie Oru Veedu Iru Vasal (1990),” he recalls. “Eventually I acted in movies like Chinna Thambi, Walter Vetrivel (1993), Palayathu Amman (2000), and so on,” he says. With over 30 years of experience in art, Marthandam has also done poster works for several of director TSBK Moulee’s films including Oru Pulanguzhal Aduppudhugirathu (1983).
Talking about the era of digitalization, he suggests welcoming this wave of a change.

“We have to keep ourselves updated. I am happy that such innovations are a part of our lives today…but,” he pauses, “the only sad part is when some artists kill themselves due to digitalisation. They don’t know anything apart from drawing posters and painting for these huge film banners and cut-outs. Without finding another way, many end their lives,” he rues and says that many have moved to painting political posters on walls instead. “The pay is very less in that field,” he admits.

However, digitalization is a boon for youngsters and many upcoming artists to explore new options. “I am not very digital savvy though,” he sheepishly admits. “Actor Vivek is a very good friend of mine. He constantly supports my work and was instrumental in helping me put up an exhibition at ITC Grand Chola recently,” he says, turning around and looking at a painting of the actor he made.

With over 30 pen sketches of different personalities on display at the stall, Marthandam also does on-the-spot paintings for his customers. “Back then, the people from the cine field used to buy my paintings. Now it has reduced. But the smaller paintings which I make on the spot get good response and my customers love it!” he says, pointing to a sketch he did in an hour.

Quoting a Tamil phrase Chithiramum Kai Pazhakam, he shares, “I have done over 1,000 paintings till date and practice makes me better. I am happy for the roles I have played in movies and art will always be there for me.”