The disappointing women of Baahubali

At first, it may seem absurd to consider that the women in Baahubali could be thought of as anything but unassailably strong.

At first, it may seem absurd to consider that the women in Baahubali could be thought of as anything but unassailably strong. After all, before the usurper Bhallaladeva took control, it was a matriarch, Sivagami, who ruled the kingdom with an iron fist. You also have Devasena, the wife of Amarendra Baahubali, and the fierce warrior princess of Kuntala kingdom, who is able to kill several assailants with a single swish of her sword.

And then, of course, there’s Avanthika, the female warrior, who has a perennially furious face, which suggests she wants nothing more than to kill Mahishmati soldiers by the minute. They all seem like fierce, strong portrayals, and yet, if you care to brush aside this veil of strength, you see that all of them are dealt quite a weak hand by the Baahubali universe.

Perhaps the most important feat of Sivagami, in the interest of the Baahubali story, was keeping baby Mahendra Baahubali alive, despite having an arrow planted in her back. And yet, you have to remember that it is established that she brought it all on herself. As you’re shown in the second film, she’s apparently gullible and easily manipulated by the rather unconvincing plans of the men around her.

Two decades of proof of her son’s nobility get overwritten by some pretty obvious scheming (and by a man who has consistently exposed his favouritism). For fear of spoiling the film, I’ll just say that the second film undermines the strength of her character by portraying her as an over-impulsive, domineering, insecure, hypocritical leader.

If that be the complicated case of Sivagami, Avanthika’s is a straightforward case of an underwritten character. For all her contorted fury, all she does is kill some insignificant men. It appears that her chief contribution to the cause of Mahendra Baahubali’s revolution is inadvertently luring him into the climb by dropping her mask, and later, getting coveted by him. 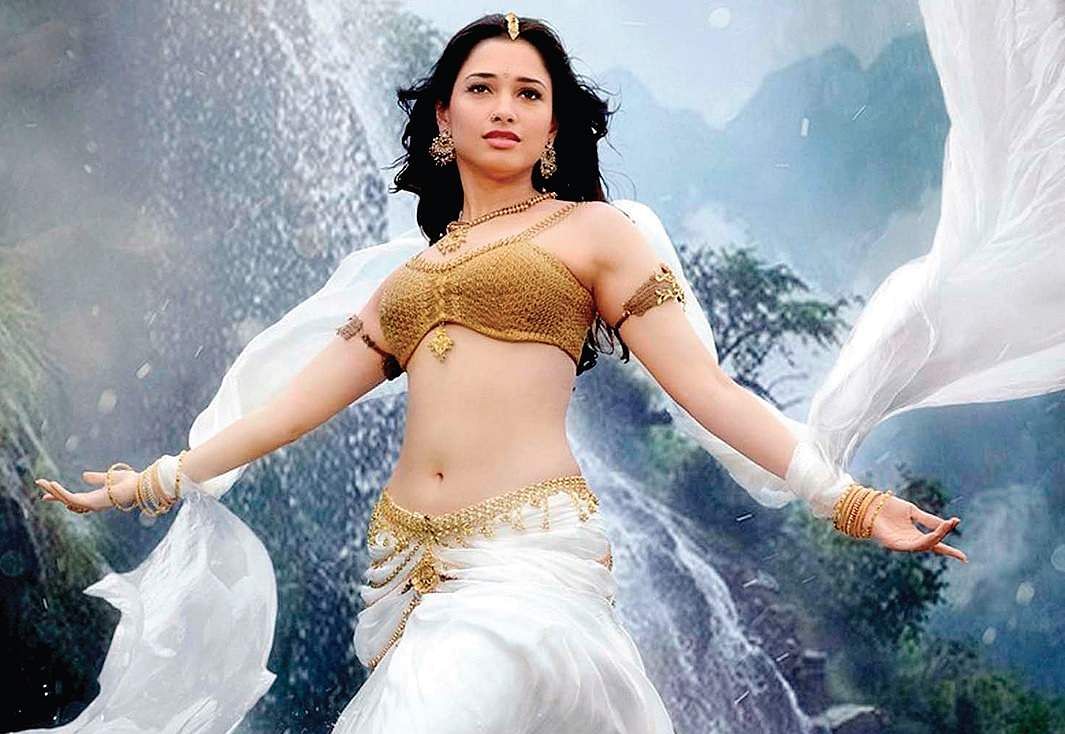 Avanthika’s surprising lack of serious contribution is, however, not half as shocking as Devasena’s. The latter, a warrior princess of Kuntala, is shown to be very much into bows and arrows, but yet is not skillful enough to rival Amarendra Baahubali. Even when in a position of great discomfort, Baahubali easily defeats her when they set out to hunt wild boars.

There seems to be some promise when Devasena questions Mahishmati’s laws, when she ridicules Sivagami for presumptuously making her choices for her. There’s even a small case to be made for her strength considering how violently she responds to a man’s bid to outrage her modesty. You see, this is the woman who’s been wronged the most. She is forced to spend thousands of days chained up outside Bhallaladeva’s palace, exposed to the vagaries of the weather, and the unfulfilled promises of a life that never was. It is she who deserves vengeance more than anybody, including Mahendra Baahubali.

And yet, when the time for revolution comes, this erstwhile warrior princess is a deadweight. Bhallaladeva makes a mockery of her lack of strength as he lugs her around in his chariot. And ultimately, her biggest contribution, apart from begetting a son with Amarendra Baahubali, is the twigs she painstakingly collected over the 20 years she had to negotiate alone. Well, that, and the flaming pot she carries on her head as part of Mahishmati’s long-observed ritual.

And remember that Devasena has never really had too much respect for the customs and traditions of Mahishmati. She makes her contempt quite evident at least once, and even sniggers at the concrete jungle she believes Mahishmati to be. While I suppose you could say that her physical strength was likely compromised by all the years of wasting away, it’s inexcusable that she doesn’t even have any tactical advice to provide to the cause of Mahendra Baahubali’s revolution.

And if it weren’t for the ever-reliable Kattappa, there’s a good chance that her foolhardy son would likely have embraced his death, considering how he bares his dogged chest at a sky full of descending arrows.
In perhaps one of the best action sequences of the film, Baahubali teaches Devasena how to draw and release three arrows at once. Yet, it eventually becomes clear that the sequence was written—much like Avanthika’s track—only to further romance.

Never ever does she use this skill. Never ever does she get to display her fighting prowess. Never ever does her mental acumen come in to save the day. Make no mistake, the Baahubali films are terrific achievements in filmmaking, and have some tremendous whistle-worthy moments, but you wish the women in them had not been reduced to being mere spectators, even as the big boys slug it out.